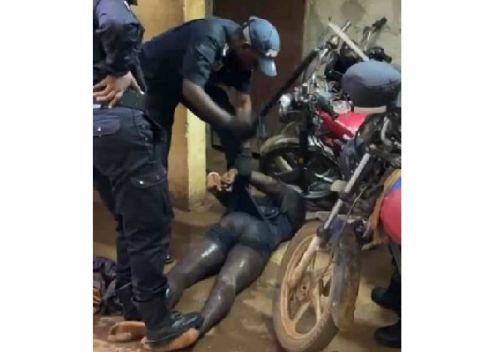 A controversial 33-second video recently went viral on social media in Cameroon. In the video, policemen can be seen beating, with a truncheon and the flat side of a cutlass, a man lying on the ground. "Remove your hand, will you steal again?" a policeman is heard asking (in French) while flogging the buttocks of the man accused of stealing, with a truncheon. A second policeman was pining the man down while a third was trying to hit him with the flat side of a cutlass.

In a release published on September 21, 2021, MBARGA NGUELE Martin, Delegate General for National Security, condemned the inhuman and degrading treatment the man was subjected to. He acknowledged the video revealing that it happened on the night of September 15 to 16, 2021, at the Yaounde 18th police station, and the victim had been accused of theft.

The policemen have been identified and appropriate measures have been taken to bring them before judicial and disciplinary authorities, the general delegate informs. This case comes days after a dozen police officers were sanctioned by the Head of State for serious violation of ethics and deontology. In a message sent on July 2, 2021, MBARGA NGUELE Martin had invited security services to bring any security personnel accused of serious violation before the disciplinary board instead of just imposing sanctions.