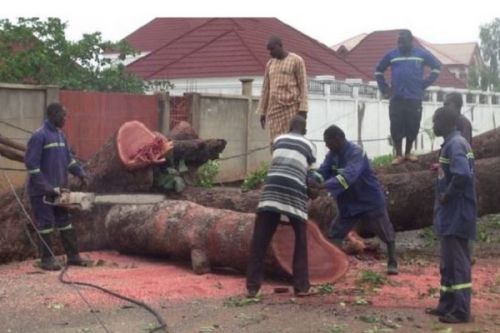 Last week, three people died during a violent storm in Garoua, the capital of the Northern region, according to the government daily Cameroon Tribune. The daily reported that on June 15, 2021, at about 9 pm during the storm, a tree fell on a car at the “presidential neighborhood”, killing two passengers on the spot. The victims include a soldier of the third joint military region. Rescue workers were able to extract two other passengers from the destroyed car alive and unharmed.

Also, at the Poumpoumré neighborhood, a tree fell on a motorbike driver who died hours later at the hospital where he was taken for treatment. The storm also caused several injuries and material damages all over Garoua. For instance, houses were damaged, roads destroyed and electric poles uprooted.

According to the national climate change observatory ONACC, heavy rainfall should be expected in the Northern region all through the June to August 2021 period. Flooding (in Dembo notably) should also be expected. Despite the announced heavy rainfall, the ONACC warns that duringthehe period, there would be some sunny days in the region.