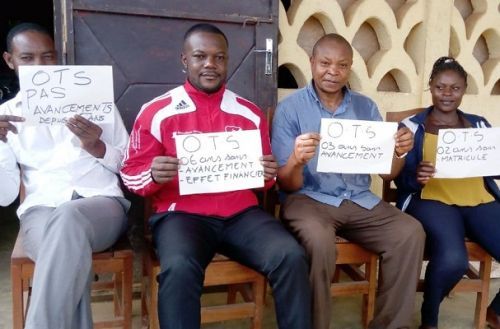 The Cameroonian government is trying to prevent a new strike announced by teachers. In a letter sent last August 19 to all teachers’ unions in the country, the Minister of Higher Education (Minesec) called for a meeting between the government and the education sector.

The approach is meant to avoid compromising the upcoming start of school scheduled for September 5. As a reminder, on August 15, the secondary school teachers' movement "On a trop supporter (OTS)" and the primary school teachers' movement "On a trop attendu (OTA)" as well as the Cameroonian Teachers' Union for Africa (Seca) signed a joint notice of strike for the coming school year. The notice was addressed to the Prime Minister and Minesec.

The signatories threatened to boycott the start of the 2022-23 school year if nothing is done to meet their needs, and even to organize a "dead chalk" operation. They said they want the payment of all the arrears due to teachers, the pure and simple abolition of the system of 2/3 and 1/3 in payment advances, the revision of the special status of teachers, etc.

Let’s note that these demands were the reasons for the strike launched by the OTS last January. After several consultations, the government has satisfied some of them, but this does not seem sufficient.