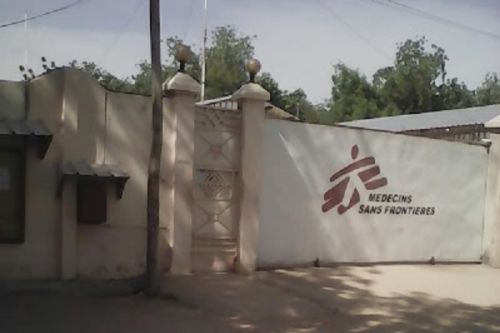 The headquarters of Médecins sans Frontières in Maroua, Far North region, was robbed during the night of October 20-21, we learned. According to police sources, the robbery was committed by a gang of 4 armed individuals. They neutralized the two security guards of the building and took away all-terrain vehicles, including a Toyota Land Cruiser pickup.

"It was easy to take the two vehicles because, in this organization, the keys are always left on the starter of the vehicles," explains Abba Chetima Malla, regional police delegate cited by L'oeil du Sahel. Warned of the presence of bandits in their premises by one of the guards, the office manager alerted the regional police head. The latter mobilized the Special Rapid Intervention Teams who went after the burglars.

One of the stolen vehicles was retrieved by the Special Rapid Intervention Teams in Mayel Guinadji, a locality on National Highway No. 1, about 60 km from Maroua. During the intervention, one of the thieves on board was injured by a bullet. A second suspect who escaped is still being actively pursued, a security source said. The second MSF vehicle was abandoned by the robbers in the village of Magada.

The gang’s mastermind is Bisssara, a Cameroonian who lives in Kousseri. "He is the one who organized everything. He prepared false files for the two vehicles. These include car registration documents. According to his plan, the vehicles had to pass through Lara, Datcheka, before entering Chad," a source said.

The Far North is one of the poorest areas in Cameroon. The region suffers from food insecurity, recurring epidemics, and attacks by the Islamist sect Boko Haram. MSF has established four offices there (Maroua, Mora, Kolofata, and Fotokol) and deployed more than 500 agents to provide medical care to refugees and local communities. This NGO is also involved in the fight against HIV/AIDS, cholera, and coronavirus in the region.