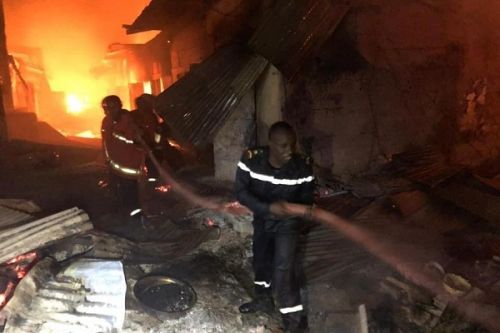 On Monday, March 22, 2021, the Kousseri market, in the Far North region, was ravaged by a fire outbreak.  According to corroborating sources, the fire started at 6:28 pm and was brought under control at around 10:30 pm thanks to the combined action of Cameroonian and Chadian firefighters from the neighboring town of N'Djamena. No human lives were lost, but several material damages were recorded.

For the time being, the origin of the new fire in this cross-border trading area where Cameroonians, Chadians, and Nigerians buy supplies is unknown. In May 2016,  "Block P" (the busiest sector of the market created in 2004 thanks to cooperation between the European Union (EU) and the municipality of Kousseri) was destroyed by a fire outbreak. That time, 560 stores and stalls were destroyed by the fire, which was suspected to have been ignited by an electrical short-circuit facilitated by the dilapidated electrical installations in the market.

This new fire at the Kousseri market comes just two days (on March 20) after the fire outbreak at the Garoua central market, in the northern region. As was the case with the Kousséri fire, an electrical short-circuit is believed to be the cause of the fire, which destroyed several stores and goods.

Fires are common in Cameroonian markets. They are usually caused by the dilapidated state of the markets, faulty electrical installations as well as the unlawful occupation of the market space.

To end this phenomenon,  the government plans to build "modern" markets in the country's major cities. It has already built such markets in Bertoua (East) and Sangmélima (South), after the fires that destroyed almost all the previous market spaces in these two cities. Also, a  60ha "modern" market is already scheduled to be built at PK17, Logbessou, in Douala (Littoral).