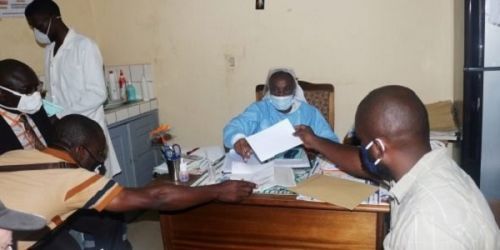 With the resurgence of Covid-19 cases in various countries around the world, the Cameroonian government fears a new outbreak on its territory.

"We registered a significant number of arrivals through our borders (mainly by air) during the Easter holidays. This can lead us to another outbreak,” said the Minister of Public Health (Minsanté), Manaouda Malachie. Since the first positive cases were reported on March 6, 2020, Cameroon has recorded four outbreaks of the pandemic, according to health authorities.

Since February, the country reported a sharp decline in the number of Covid-19 infections. "But since April 28, 2022, we observed the slight quiver around us and have recorded three deaths during epidemiological weeks 16 (April 18-24) and 17 (April 25-May 1)," the Minister said. Measures have nevertheless been taken "to intensify our response and stay ahead of the pandemic," he says.

These include the resumption of "systematic" screening of patients in emergency and hospitalization departments of health facilities and the intensification of vaccination activities throughout the country. The official also announced that he has instructed the reinforcement of the technical platform in health facilities. This is being done "through the acquisition of scanners and oxygen units, the strengthening of the ambulance fleet with the institutionalization of medical regulation, but also qualified staff that earned us the congratulations of CAF and various sports delegations at the end of the CAN .” As of May 11, Cameroon officially had 119,947 confirmed positive cases, including 117,980 remissions and 1,930 deaths.