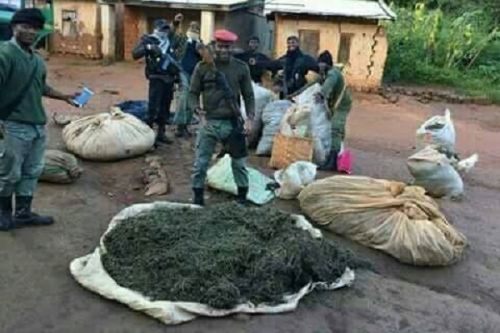 Between September and November this year, the National Gendarmerie seized over 410 kg of drugs and arrested about ten people. The latest operation was carried out last November 18 and ended with the seizure in Yaoundé of 150 grams of cocaine, hundreds of cannabis joints, syringes, and consumption pipes. A dealer and seven consumers, including a student, were also arrested.

The same day, in the small town of Loum, about a dozen kilometers from Douala, the national gendarmerie got its hands on 60 kg of cannabis from Balessing in the West. They seized the drug in the home of a man in his forties. The latter is part of a network that operates in the Littoral, North-West, South-West, and West regions.

Two months ago in Yaoundé, the national gendarmerie seized 350 kg of marijuana hidden in seven bags of corn. According to Lieutenant Bobodji Bello's explanations on national television, "a delivery man was in charge of transporting the drug from Bamenda to Yaoundé, where a buyer collects the cargo to be sold in the districts of the city.”

During the second semi-annual conference of governors held from November 16 to 17, the Minister of Territorial Administration, Paul Atanga Nji, noted that the sale, consumption, and even the cultivation of drugs are reaching worrying proportions in Cameroon. He urged the 10 governors of the regions "to lead a determined fight against all forms of drugs: cannabis, tramadol, cocaine and whiskey sachets, drugs that encourage juvenile delinquency and serious crime.