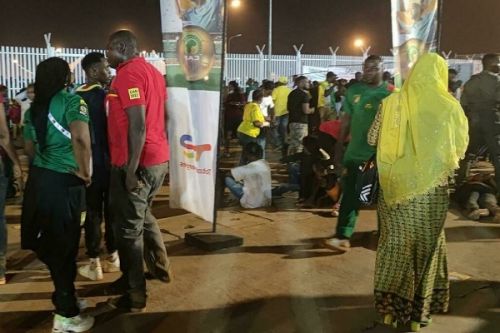 Yesterday, January 24, shortly before the Cameroon-Comoros match for the round of sixteen of the African Cup of Nations 2021, a stampede occurred at the southern entrance of the Olembe stadium in Yaoundé. According to the report presented by the Minister of Communication, eight people died and 38 were injured (31 slightly injured and 7 seriously).

In the aftermath of that incident, the President of the Republic, Paul Biya, has ordered an investigation to shed light on the circumstances surrounding this sad event, the government informs.

The Confederation of African Football (CAF) also confirmed the incident and announced an investigation. "CAF is currently investigating the situation and trying to get more details on what transpired. We are in constant communication with the Cameroonian government and the Local Organizing Committee," the statement published on its website reads.

After the tragedy, the Minister of Public Health Manaouda Malachie visited some health facilities to inquire about the situation. A crisis meeting was also announced for today January 25, at 9 a.m in Yaoundé.

According to several testimonies, attendance was particularly high during this soccer match. Indeed, the number of fans going to stadiums to watch the AFCON2021 matches is growing constantly due to some measures taken by authorities. Those measures include the change of working hours to 7:30 a.m.-2:00 p.m. in public administrations and distribution of tickets to allow some people to attend the matches.

Some of the witnesses to that stampede also point at the insubordination of some fans and the relaxed security scheme around the 60,000-seat stadium during the match.