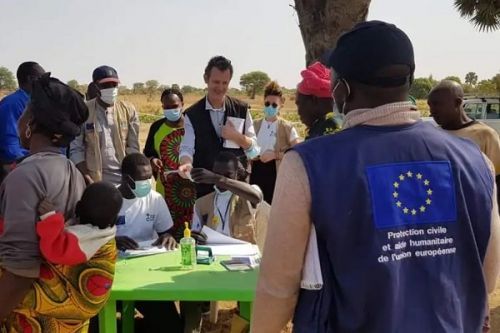 On the sidelines of the Lake Chad Conference, which started this week in Niger, the EU Commission announced it is disbursing €17 million (CFA11.1 billion) to support vulnerable communities in Cameroon in 2023.

“This funding will provide much-needed support to vulnerable communities impacted by conflict, displacement, and increasing food insecurity,” said Janez Lenarčič, EU Commissioner for Crisis Management. EU estimates that nearly 3.9 million people are in a difficult humanitarian situation in Cameroon since 2022. The main reasons are the clashes between secessionist groups and the Cameroonian army in the Northwest and Southwest regions, which have already forced 598,000 people to flee their villages; the abuses of the Islamic sect Boko Haram; inter-community conflicts in the Far-North region; the persistent drought that has caused food crisis, etc. According to the EU, it is necessary to quickly provide vital assistance to all these people displaced by the conflicts, as well as to the host communities. It is also necessary to “address the most pressing food needs of conflict-affected households and communities and treat children under the age of five suffering from severe acute malnutrition,” the organization said, stressing that it will also focus on the health sector and the establishment of an education program for these displaced populations.

In 2022, the EU allocated €27.5 million, or CFA18 billion, in humanitarian aid to Cameroon. Part of this money came from the European Development Fund, the EU's main instrument for cooperation and development assistance to the African, Caribbean, and Pacific (ACP) countries.