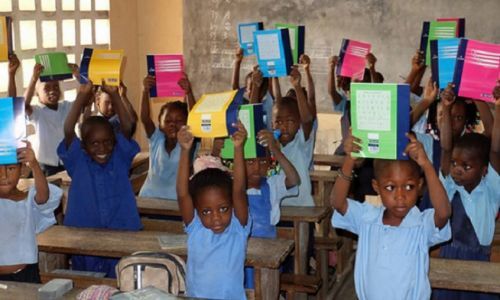 The Cameroonian government will distribute close to 2.5 million French, English and mathematics textbooks to 13,000 public schools in the Francophone and Anglophone subsystems throughout the country.

According to Ambroise Owotsogo, coordinator of the education reform support program PAREC, speaking to the government daily Cameroon Tribune, a similar operation was carried out last year with the distribution of course books to primary school classes SIL, Class 1, and class 2. "This year, we are moving forward with Elementary 1 and 2, as well as Class 3 and Class 4. Next year, we will continue with middle school classes 1 and 2, as well as Class 5 and Class 6," he added.

He nevertheless warns that the course books already available will not be distributed on the first day of the school year. Rather, it will start at the end of the process aimed at selecting a company in charge of the distribution and the official launch of the operation by the Minister of Basic Education.

Ambroise Owotsogo explains that the distribution program, which will last six years, is aimed at providing textbooks to students, helping parents save close to XAF6,000 per student. Although the amount spent for this year’s operation has not been disclosed yet, it is worth mentioning that last year, XAF5 billion was spent thanks to the World Banks' financial assistance, to distribute 3 million textbooks.

Finally, the coordinator notes that for last year’s operation, since access to some regions was difficult, the distributors released the schoolbooks to district inspection offices since the difficult access parameter was not taken into account. Also, he adds, some of the free coursebooks landed in bookstores although they were not meant to be sold. To prevent such a thing from happening again, this year, the free coursebooks will be stamped with "Property of the State of Cameroon - Sale is forbidden" and "Cameroon-World Bank Cooperation."