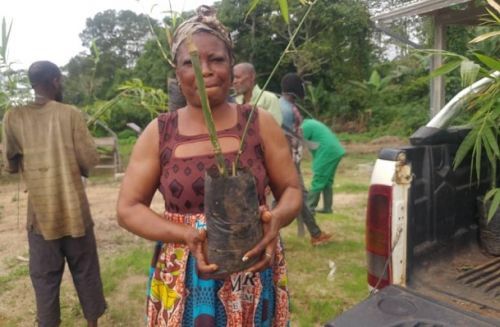 The Cameroonian government, via its environment department, wants to plant 20,000 bamboo and rattan seedlings to reforest the northern region. The initiative was launched in 2018 with support from the International Bamboo and Rattan Organization.

Under the pilot phase, from 2018 to 2020, the goal was to "demonstrate the success of using bamboo to restore the biodiversity of the banks of the Benue River," explains Angèle Wadou, Minepded's Deputy Director of Biodiversity and Biosafety. She reveals that since then, more than 20,000 bamboo seedlings have been planted in Lagdo, Pitoa, Garoua 2, and Garoua 3, four communes of the Benue Department.

"Bamboo contributes effectively to the fight against climate change. The use of bamboo helps reduce the abusive and illegal exploitation of woody species by providing an alternative and renewable biomass energy source. Because it grows and matures faster than most tree species, bamboo can reduce pressure on other forest resources, thus reducing deforestation," says an expert quoted by L'œil du Sahel.

Bamboo can store 13 tons of carbon per hectare per year, thus contributing to the achievement of the United Nations Sustainable Development Goal 13 on "urgent action to address climate change and its impacts."

"On the socio-economic level, a bamboo stem costs between CFA350 and CFA500 in some localities in the northern part, which contributes to household savings, food security, and the fight against poverty," said Angèle Wadou interviewed by the same newspaper.

The planting of bamboo reinforces the Benue Watershed Management Project, as this plant helps to fight erosion by reinforcing slopes with degraded soils. To ensure its sustainability, the environment department entrusted the program to the decentralized local authorities as of 2021.

The government still has 9 years to restore the 12 million hectares of degraded land and forest landscapes identified throughout Cameroon, including more than 8 million hectares in the northern part alone, comprising the Adamaoua, North, and Far North regions.
D.M.