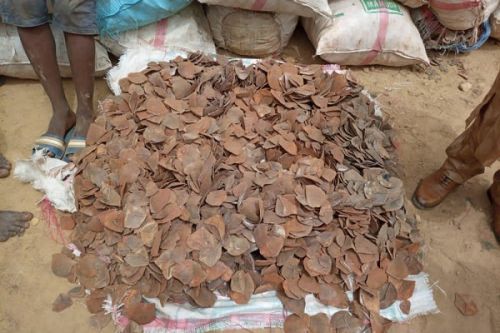 Customs officials seized 4.4 tons of pangolin scales in the north

While searching a semi-tractor-trailer truck carrying goods in the northern region of the country, Cameroonian customs officials made an unprecedented discovery. They seized 42 bags of pangolin scales, weighing 4.4 tons, according to authorized sources.

Customs officials estimate the value of this shipment that traffickers were preparing to export to Nigeria at about XAF4 billion, sources within the Customs Department of the Ministry of Finance revealed. "This is the biggest seizure of its kind made by Cameroonian customs since the beginning of the year 2021," a customs officer indicated.

Trafficking in pangolin scales is rampant in the country, which is one of the few territories to host three species of pangolins: the black-bellied pangolin, the white-bellied pangolin, and the giant pangolin. According to a recent report by the International Union for Conservation of Nature (IUCN), between 400,000 and 2.7 million pangolins are poached every year in the Central African forest.