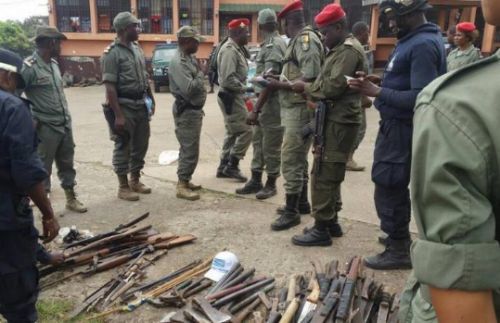 More than 23,000 firearms are circulating illegally in Cameroon. According to statistics given in December 2020 by the Minister of Territorial Administration (Minat), Paul Atanga Nji, the government has granted only 3,800 authorizations to carry weapons. The Economic, Social, and Cultural Council of the African Union Commission (AU) estimates that there are more than 30,000 small arms and light weapons (SALW) in illegal circulation in the country. These weapons include revolvers, pistols, rifles, assault rifles, and machine guns.

Amid the Anglophone crisis in the northwest and southwest regions, incursions by the terrorist sect Boko Haram in the Far North and Central African rebels in the east, these figures raised concern for the Cameroonian government; especially since these weapons, which are not held by the military but by civilians, are generally found in the hands of armed groups. The situation has prompted the authorities to ban the sale of arms and ammunition. Gun shops in some parts of the country were also closed. The most recent measure is a nationwide ban on the sale of traumatic weapons.

The decision was taken on May 6 by the Minat, "due to the current security context and given the misuse of this category of weapons by individuals of dubious character. The member of the government also proceeded on May 19 to the destruction of a stockpile of illegal weapons in Buea (South West). These were weapons from pacification operations and those returned by ex-combatants of Boko Haram and armed groups in the Anglophone regions.

In 2018, Cameroon hosted the first conference of States Parties to the Kinshasa Convention for the Control of Small Arms and Light Weapons, their Ammunition, and all parts and components that can be used in their manufacture. The objective was to find solutions to this phenomenon, which is a threat to peace and security in countries, particularly in the Central African sub-region. To this end, the government is taking action through demobilization, disarmament, and social reintegration centers for youth in conflict zones. Awareness-raising sessions for stakeholders are also organized on the dangers of handling firearms.