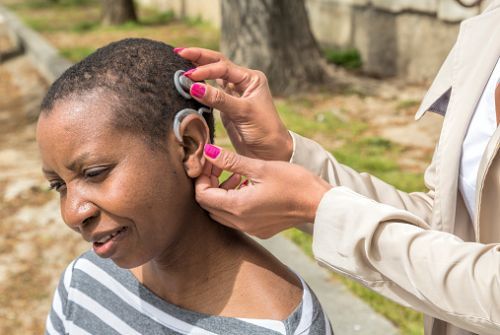 Health: Cameroon experiments with the cochlear implant, a device that eases hearing

Cameroonian and Moroccan ear, nose, and throat (ENT) specialists have just performed cochlear implants on three children under the age of seven with pre-lingual deafness (having never heard or spoken) at the Yaoundé General Hospital (YGH). This medical feat was made possible thanks to the collaboration between the YGH and the Mohammed VI University Hospital (CHU) in Marrakech, Morocco. Cochlear implants allow people with permanent hearing loss to regain their hearing, experts explain. It is an electronic device placed in the inner ear.

The processor converts sound into electrical stimuli that are picked up by electromagnetic means using a surgically implanted antenna. The antenna then directs the signal to internal electrodes that stimulate the auditory nerve. It is however difficult to make these devices available to everyone who needs them, mainly because of their high cost. It costs CFA11 million for this surgery, which has recently been tested in Cameroon to rehabilitate people with profound or severe deafness.

The first such procedure was performed in January 2019 on a man in his fifties with bilateral profound deafness at the YGH. The goal, in the long run, is to allow Cameroonian specialists to become familiar with this technique so that they can practice it later without any outside expertise. "We must be able, all by ourselves in a few years, to deploy this device," Dr. Yves Andjock Nkouo, head of the ENT unit at the YGH, told CRTV. According to the 2011 Demographic and Health Survey (EDS-MICS), 5.4% of the Cameroonian population suffers from at least one disability. Sensory deficiencies are the most common, especially hearing deficiencies (1.6%).