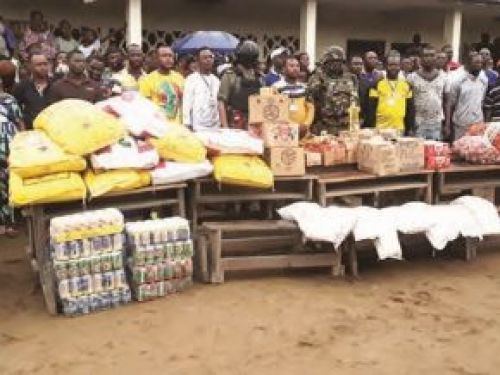 The Cameroonian army is concerned about the well-being of the people affected by the Anglophone crisis in the North-West and South-West regions. The 2nd Military Region and the 2nd Gendarmerie Region have donated food and other household items to the population of Yoke, in Muyuka.

“The items we brought with us are to be shared so that everyone gets their share even if it is small. You should know that we care about your well-being,” he said. He added that the (military) work of protecting the population would be facilitated if the people work hand in hand with the army.

Colonel Tchinda Mbouzikeu Henri, commander of the Southwest gendarmerie legion, encouraged the population to cooperate with the soldiers by providing them with all the information they have. Receiving the gifts on behalf of his community, the President of the General Youth Council of Yoke, Levis Fomuboh, praised the generosity of the soldiers who thought of them in these difficult times. According to the spokesman for the people of Yoke, the "unbearable" atrocities committed against the local people "made them lose confidence."

By promising to work in synergy for the "reconstruction of their community," these populations suggested that the military hierarchy should look into the case of some of their members who are in detention.