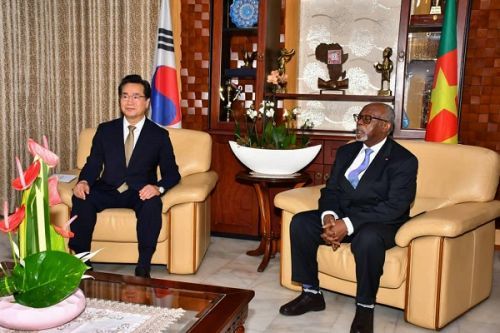 South Korea requested Cameroon’s support to host the 2030 edition of the World Expo. As part of this approach, the South Korean Minister of Agriculture, Food and Rural Affairs, Chung Hwang-Keun, paid a working visit to the African country this week.

On October 24, he handed over to the Minister of External Relations (Minrex), Lejeune Mbella Mbella, a letter from President Yoon Suk-yeol in which the head of state asked Paul Biya for Cameroon's support for the event. As a reminder, South Korea was chosen to host the World Expo after it submitted a bid to the Bureau of International Expositions (BIE) in June 2021. The event will take place from May 1 to October 31, 2030, in the port city of Busan, South Korea's second-largest city. Three other countries have also applied: Italy (Rome), Ukraine (Odessa), and Saudi Arabia (Riyadh).

Universal exhibitions are held every five years and last a maximum of six months. They allow the chosen country to build extraordinary pavilions and transform the host city in a lasting way, according to the BIE. The previous expo, held from October 1, 2021, to March 31, 2022, in Dubai (United Arab Emirates), recorded 24 million visitors, according to official figures. The 2025 World Expo will take place in Osaka, Japan.