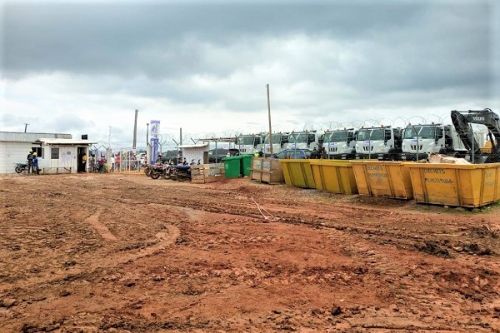 The SIC-Pizzarotti project in the department of Mefou-et-Afamba (Central Region) has officially started. The Managing Director of the Cameroon Real Estate Corporation (SIC) took delivery last week of the materials to be used as part of the project.

SIC and its partner Italian Pizzarotti will build 1,224 housing units, including 224 social housing units, some basic community facilities, as well as roads, and various networks over a 16 ha land. The project also includes the establishment of an industrial base in Nkolmeyos (59 hectares). Phase I, valued at  CFA96.7 billion, concerns "the acquisition of a large stock of materials, machinery, and equipment dedicated to the establishment and operation of the industrial base. It is also to design and create an industrial hub that will allow the installation of SMEs and SMIs.”

The creation of this industrial zone on the Yaoundé-Mfou road will make it possible to boost socio-economic and industrial activity through the creation of a value chain driven by the installation of SMEs and SMIs around the area. SIC also assures that the production capacity of the industrial base will be exploited over 40-50 years with an annual production of at least 1,000 homes. Phase II concerns the construction of more than 9,000 social housing units, mainly in Zouatoupsi and Nkolntsam in Mbankomo.

Overall, the project is estimated at more than CFA115 billion according to a financing agreement between the Autonomous Amortization Fund and the Italian bank Intesa San Paolo. It is expected to last until 2026.