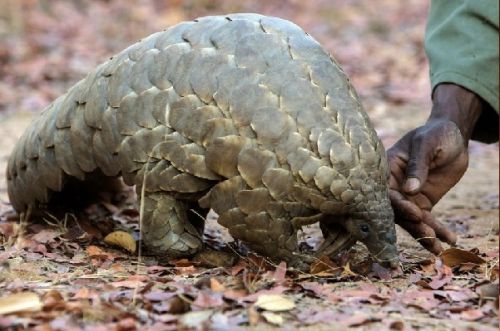 Cameroon recently set up a pangolin rehabilitation center to guarantee the survival of this endangered species. This center - the very first of its kind in the country - is housed in the Mefou Park known as a primate sanctuary. It is based on the model of the Tikki Hywood Foundation (in Zimbabwe), which is a world reference in the pangolins rescue and rehabilitation.

"The rehabilitation center was developed in 2019 to receive living pangolins that have been rescued, by authorities,  from the illegal wildlife trade network. This center was developed because of the need that arose following the multiple seizures of pangolin scales from Cameroon," said Angelia Young, founder, and director of the Cameroon Tikki Hywood Foundation.

"Fragile pangolins are brought to the center and our trained field staff assess their condition and then continue the rehabilitation process until they are released," she said in a recent interview with Wildlife Justice, a bilingual publication of The Last Great Ape Organisation (LAGA), an NGO that supports the Cameroonian government in the enforcement of wildlife law.

In recent years, pangolin scales seizures have increased in the country. At least 20,000 tons of pangolin scales have been seized in less than 5 years in Cameroon, according to TRAFFIC, wildlife, and forest species monitoring network.

In October 2020, a suspected trafficker was arrested with 23 kg of pangolin scales in Bertoua. In March 2019, a joint operation by the Ministry of Forests and Wildlife (Minfof) and police led to a record seizure of 2.3 tons of pangolin scales in Douala. The illegal shipment was valued at XAF150 million.

"The species is becoming rare. The seizures made over the last decade sufficiently demonstrate that the pangolin is seriously threatened. It is, therefore, necessary to get everybody involved in the species’ preservation," said Joseph Lekealem, Director of Wildlife and Protected Areas at the Minfof, on the 2020 World Pangolin Day that aims to raise awareness of the importance and plight of the pangolin.

According to the International Union for Conservation of Nature (IUCN), the pangolin is the most trafficked mammal in the world. It is poached in particular for its scales, which are highly prized in Asia ( especially in China) for their supposed medicinal properties. Last year, China withdrew pangolin from the list of ingredients of its traditional pharmacopeia, as it is suspected to have been the intermediate host for the transmission of Covid-19 from bats to humans.

In 2016, the Convention on International Trade in Endangered Species of Wild Fauna and Flora (CITES) granted pangolin the highest level of protection prohibiting its international trade.

Also, Cameroonian law classifies pangolins as Class A, which is a fully protected species that "under no circumstances" may be killed. But pangolin is still freely sold in markets, as its meat is highly appreciated by consumers.