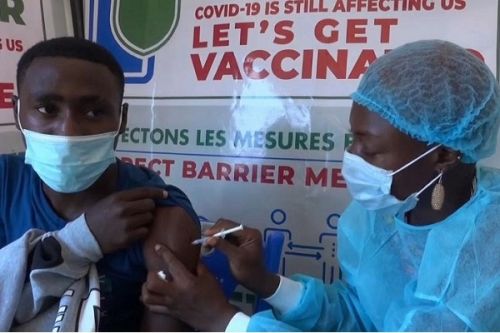 The African Cup of Nations (CAN) has boosted the Covid vaccination rate in Cameroon, according to the Minister of Public Health (Minsanté), Manaouda Malachie. The official was speaking on January 27, 2022, in Yaoundé, during a ministerial council.

"When the CAF and the government announced the requirement for a health pass to access stadiums, Cameroonians started getting their shots. Currently, about 90,000 people have taken their first doses of the vaccine, increasing our vaccination coverage to 6.7%,” the Minsante said on state radio.

Indeed, according to rules issued by the Confederation of African Football, to be allowed to access stadiums, fans must be fully vaccinated and present a less than 72-hours old negative PCR test or a less than-24 hours old antigenic RDT test. That measure aimed to avoid making the AFCON2021 matches clusters of the covid-9 disease.  It is also an opportunity for Cameroon to test as many people as possible and encourage vaccination amid widespread vaccine hesitancy.

Last January 9, on the eve of the opening match between Cameroon and Burkina Faso, 2,500 people received doses of the Covid vaccine at the Yaoundé International Vaccination Center while a few weeks earlier the average daily doses that the center used to give was 120-150, according to Dr. Yann Emmanuel Ntsobe Njoh Bolo Bolo, head of the center.

There are crowds at some other vaccination sites while some of the fans are resorting to fake vaccination certificates.

The Minsanté reveals that the country’s Covid response system has been strengthened in the framework of the AFCON2021, with an increase in the capacities of the medical staff. This action was aimed at ensuring appropriate management of the massive influx of patients and severe cases.

It proved useful because, while some people were fearing an explosion of cases, it is a contrary scenario with all “the indicators turning green”.  "We are testing the maximum number of people but there are very few infections. As of today, we have tested 200,000 people and the positive cases are just 0.6% of that number. This amounts to nil when talking about epidemiological situations," says Manaouda Malachie.

Officially, Cameroon has recorded 117,570 positive cases, including 1,906 deaths and 114,238 recovered, according to figures released on Thursday, January 27.