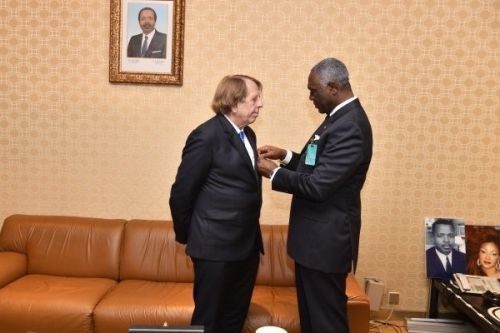 Claude Le Roy, coach of Cameroon’s national football team between 1985 and 1988 and then in 1998, was made Knight of Cameroon’s order of merit last January 27.

On behalf of the Head of State, President Paul Biya, the former coach was decorated by the Director of the Civil Cabinet of the Presidency of the Republic (DCC), Samuel Mvondo Ayolo.

This order of merit is usually awarded to Cameroonians and foreigners for "distinguished services rendered" to the State. Claude Le Roy was the national team’s coach in 1988 when the country won the African Cup of Nations. Under his leadership,  the Indomitable Lions reached the final of that football competition in 1986 but, they were defeated at that stage by Egypt in a penalty shootout.

The 73-year-old French coach who traveled to Cameroon for the 33rd edition of the AFCON fought back those who were against the organization of that edition in Cameroon. He was particularly critical of  Gianni Infantino, President of the International Federation of Association Football (FIFA), who he accused of doing everything to make sure the AFCON will not be played on the African continent.

"This competition completely defeats all the maneuvers of Gianni Infantino who ultimately tried to prevent the organization of the African cup,” he said in a viral video upon his arrival in Cameroon.

In the video, he also congratulated the Confederation of African Football (CAF) and Cameroon for resisting "pressures" in the organization of that edition.  "I absolutely wanted to come to Cameroon. I could not think for a second to be absent for this African Cup after I fought so much against those so-called world bodies that jeopardize the development of soccer for the organization of this competition in Cameroon, an incredible soccer nation,” he said.

"My thanks go to Cameroon for what it has done for me. Without Cameroon, I would never have had such a career. So I owe a lot to this country. This is not flattery or just to please: it is what I truly feel,” he added;

His book "Le Sorcier blanc” (The White Wizard) published in March 2021 recounts his career, including his time as coach of the Indomitable Lions.