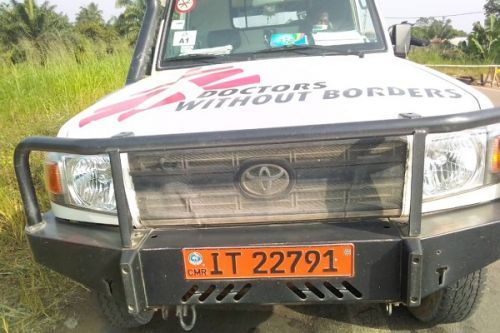 Anglophone crisis: Doctors Without Borders accused of blatant collusion with separatists in the Southwest

The International NGO Doctors Without Borders was caught red-handed, on December 26, trying to exfiltrate a separatist combatant wounded by the army during a skirmish, the Ministry of Defense formally accuses.

"Doctors Without Borders deliberately initiated an operation to exfiltrate and cover terrorists despite repeated warnings from Cameroonian authorities," accuses Captain Cyrille Atonfack, communication manager at the Ministry of Defense, in a statement dated December 27.

According to the army official, in the afternoon of December 25, 2021, at Tinto II, there was a clash between gendarmes and two separatist fighters who were on a scouting mission in preparation for attacks on the Tinto gendarmerie brigade. The two wounded combatants fled and took refuge in the Ntenmbang forest. The following day, they contacted the head of the Doctors Without Borders branch in Mamfe (an Indian national) "to negotiate their exfiltration from Ashum, in the department of Manyu, to an approachable health center," writes Captain Cyrille Atonfack Atonfack.

An ambulance driven by a Cameroonian driver who was assisted by a nurse of the same nationality was dispatched to Ashum for this operation. When they arrived in the village, "one of the wounded assailants was already dead and buried. So, the dispatched team took care of the survivor, a certain Mbu Princely Tabe, alias ‘General Moving Star’,” he continued.

"At no point (...), MSF has notified the Manyu administrative authorities in accordance with the enforceable operational protocols validated by participating parties (...) Initial findings of the ongoing investigation show that in cooperation with local Doctors Without Borders executives, the nurse who took part in the operation filled the evacuation form with fake details. For instance, she recorded ‘Ndip Ben’ as the patient’s name, declared the wounds were not caused by gunshot and even declared he was coming from Mamfe," the Ministry of Defense points out.

The international NGO’s silence on some accusations

On December 27, the international NGO also issued a statement in reply to the Ministry of Defense. “On Saturday, 25 December, the emergency call centre of the humanitarian medical organisation Doctors Without Borders/Médecins Sans Frontières (MSF) received a call related to a wounded person in need of urgent assistance in the Tinto health area. One of our ambulances managed to pick the patient up the next morning at Ashum area. Given his severe condition, he had to be transferred to Mutengene via Kumba for surgical attention,” the NGO wrote.

It adds that it "had contacted the local military authorities beforehand, informed them about the transfer of a wounded patient to Mutengene and shared the patient's age and gender as requested.”

Doctors Without Borders does not however answer the accusations of the purported fake declaration. Has the NGO lied about the name and the nature of the patient’s injury? The release does not answer those questions.

It only reminds that like “elsewhere in the world, MSF treats people based on medical need, regardless of their background or affiliations.”

“Allegations of complicity with any actor in a conflict puts patients and MSF staff in grave and immediate danger (...) we have been in touch with the authorities to understand the reason for the miscommunication with this reference,” it adds.

Meanwhile, according to the Ministry of Defense, "it is proven that Doctors Without Borders has close relations with the terrorists operating in the southwest region and will take any action to facilitate their bloody operations.”

In 2020, the government suspended the NGO’s operations in the Northwest, the second region where the separatist crisis is raging. The stated reason was collusion with the separatists. After fruitless negotiations between Cameroonian authorities and the Director-General of Doctors Without Borders, the NGO finally stopped its operations in the region.