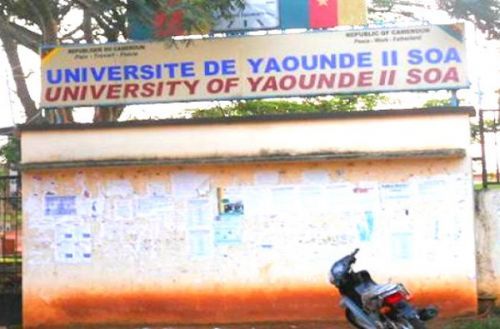 On April 26, 2021, the University of Yaounde II SOA signed an agreement with the Maarif Foundation in Cameroon (FMC), a Turkish governmental institution dealing with socio-educational matters. The agreement, signed by Prof. Adolphe Minkoa She (rector of the university) and Bugro Demitras (representative of the Turkish Ambassador to Cameroon) provides for the creation of a center for the study of Turkish language and civilization at the University of Yaoundé II SOA.

"The agreement will be materialized by the opening of a Turkish study center. After that, we will launch cooperations between Turkish universities and the University of Yaoundé II, "said Onur Yildiz, representative of the Foundation in Cameroon. In other words, this agreement should be complemented by an academic exchange partnership between Turkish universities and the Cameroonian university.

For the university authorities, with such agreement, the University of Yaounde II SOA is becoming internationally renowned. Such an international reputation started with China, through the Confucius Institute, which teaches the Chinese language and culture in Cameroon.

This agreement with the Maarif Foundation is a result of the cooperative actions between Cameroon and Turkey. The cooperative actions are noticeable in the commerce, army, construction, and education sectors. In the education sector, multimedia centers were built at the Universities of Bamenda and Yaoundé, the La Fraternité schools built in Maroua and Yaoundé. Also, a professional training school was built at Minboman, in Yaounde.