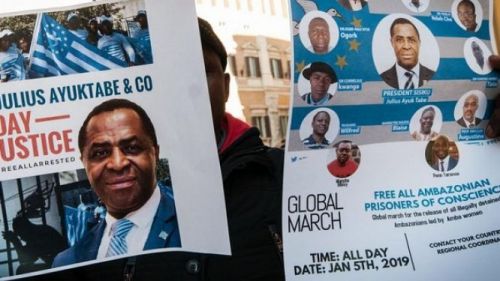 Separatist group “Ambazonia,” whose militia is wreaking havoc in the Northwest and Southwest, recently signed an alliance with the Biafra Nations Youth League (BNYL), a separatist group based in Eastern Nigeria.

According to Nigerian media Vanguard, the alliance was signed during the weekend in Enugu, capital of Enugu state in Nigeria.

According to Princewill Chimezie, leader of the BNYL, the alliance comes to re-engineer a collaboration that has been on for a long time “to give a stronger voice for their self-determination pursuits.”

Enow Arrey, president of the Universal Negro Association (UNIA) in Calabar, Cross River State, Nigeria, was one of the people representing Cameroonian separatists during the signature. “I found out that my brothers in Nigeria have a similar problem as Southern Cameroonian people. My mission is to convey that Africa has the right to decolonize their place. We’ve decided that our people must be one as they were before colonization,” he said.

They believe the collaboration will yield new self-defense mechanisms. “We resolved to defend ourselves by any means possible and we are not afraid to say that, because we can’t continue to sit down and watch enemies massacre our people. I am afraid we may resort to the guerrilla movement. We have been most prominent in the Bakassi areas where we developed a partnership with Ambazonia because we found out that Biafra has a similar problem as Southern Cameroon,”  Princewill Chimezie said.

The BNYL is a pro-Biafra armed group whose members want to revive the "Republic of Biafra" created by Chukwuemeka Odumegwu-Ojukwu leading to the Nigerian civil war of 1967-1970.

Since 2016, the Anglophone regions of Cameroon (Southwest and Northwest) have been hit by a security and sociopolitical crisis. The regular army is combatting armed groups who on the pretense of wanting a secession of these regions tend to loot, rape, and murder residents.