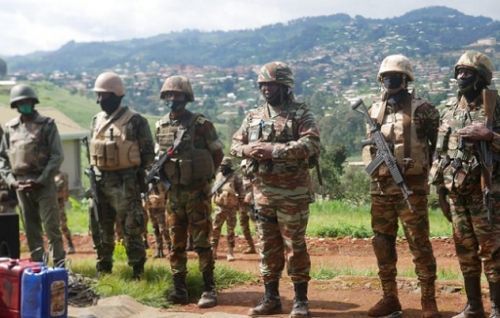 MINDEF condemns growing campaigns against the defense and security forces

On October 28, 2021, while inaugurating a new building built by military engineering services at the Middle School De La Retraite, Joseph Beti Assomo, Minister Delegate at the Presidency of the Republic in charge of Defense (Mindef), once again denounced the population’s defiance towards uniformed men.

"I would like to take this opportunity to outrightly condemn the pernicious trends and unpatriotic and defiant campaigns against uniformed men and women. The campaigns are growing popular day by day in our society,” the Mindef said.

“Like their comrades of the army, gendarmerie, and police, military engineers are committed to serving their country everywhere whenever needed even risking their lives when necessary,” he added.

He reminded the populace that defense and security forces are trained to respect human rights and therefore should avoid acts that could escalate quarrels where peace and solidarity are needed.

In September, the Mindef called the general public’s attention to sanctions incurred by those who attack security and defense forces carrying out their duties. Also, after several fights between civilians and security forces, several members of the government, including Ministers of Territorial administration and communication, made the same call.