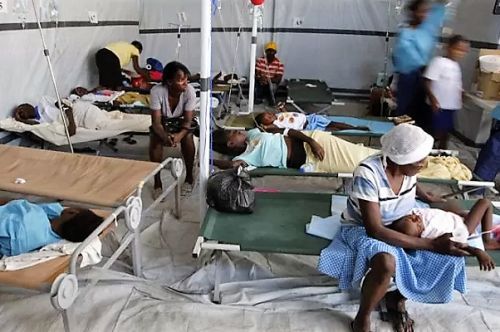 The government has sent this week a mission composed of Prime Minister Joseph Dion Ngute, Malachie Manaouda, Minister of Public Health (Minsanté), and Gaston Eloundou Essomba, Minister of Water and Energy (Minee) to assess the cholera epidemic in the Southwest.

“I congratulate the health soldiers, the partners, and the various actors on the ground for their commitment. The situation is under control,” Malachie Manaouda tweeted, reassuring that the response plan rolled out in the region is yielding good results. The cholera outbreak has affected five regions across the territory but the situation is worse in the Southwest, which concentrates more than 80% of the new cholera cases recorded between March 21 and 24, 2022, according to figures from the Health Ministry.

The latest figures report “2,916 cumulative cases and 61 deaths. About 10% of the cases are children under 5 years old.” The city of Buea has so far recorded 14 patients admitted to the regional hospital. To keep the situation under control, the government has deployed a response plan based on two axes. The first axis concerns reactive vaccination campaigns. A first campaign has already been carried out and another is scheduled to begin on April 8 in three regions of the country, including the Southwest. The second axis is an awareness campaign on basic hygiene rules, starting with systematic hand washing. This component also includes the construction of latrine units to stop the spread of this epidemic.