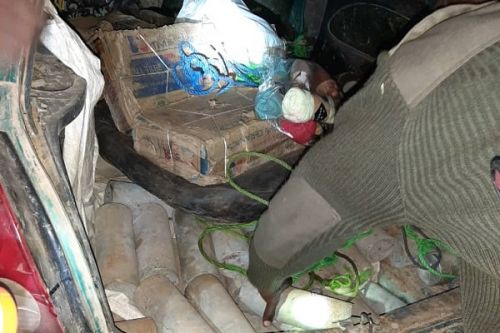 The information was disclosed by the Directorate General of Customs (DGD). On its official website, the customs administration states that 207 improvised explosive devices (IEDs) weighing 2.07 tons were seized.

The suspicious packages were coming from Nigeria in a car bound for Bertoua, capital of the Eastern region, customs source informs. "The two individuals who were in the car escaped while customs officials were searching the vehicle,” the source adds.

"This is the largest quantity of IEDs seized in Cameroon (…) Following instructions from the governor of the region Jean Abate Edi'l, the defense forces tested and confirmed the extreme dangerousness of these explosives," the DGD indicates. They were therefore handed to military engineers in Garoua.

For some time now, the traffic of explosive devices seems to be gaining ground along the Cameroon-Nigeria border in the northern regions of Cameroon. In the second quarter of 2020, customs officials seized a volume of 300 liters of "Tchoukourdaye", a solution used to manufacture IEDs.

In a note issued on June 24, 2020, the Secretary of State for Defense in charge of the Gendarmerie (SED) Galax Etoga, drew the attention of the commanders of the 10 gendarmerie legions to "the threat of terrorist attacks in major cities and towns."

Since then, Cameroon has recorded several attacks caused by explosive devices. The last explosion occurred on August 20 in Bamenda, capital of the English-speaking northwest region. A "home-made bomb" exploded in an intercity bus leaving Bamenda for Yaoundé.

Between June and August 2020, four IEDs exploded in Yaoundé; while there were no human losses in those explosions, huge material damages were recorded and some people were injured.

Authorities then tightened security measures in the city. On the evening of Saturday, August 29, all vehicles coming from the Bafoussam-Yaoundé axis were systematically scanned by the gendarmerie before entering the city.