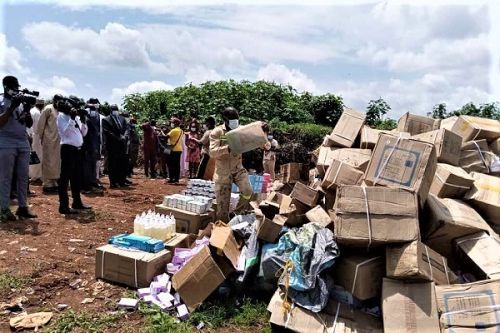 Cameroon’s customs and gendarmerie incinerated dozens of boxes of illicit drugs (generics, antibiotics, anti-epileptics, anti-inflammatories, etc.)  this week in Bertoua. The cargo is valued at nearly CFA136 million, according to Cameroon Tribune.

Illicit drug trafficking continues to flourish in the region, although the government is working to stop it. On April 20, nearly CFA22 million worth of fake drugs were destroyed in the same region. And data from the Health Ministry revealed that overall in 2021, nearly CFA3 billion worth of fake medicines were destroyed in Cameroon. The World Health Organization (WHO) reported that fake drugs kill at least 100,000 people each year in Africa, where 7 out of 10 medicines are fake. Many health problems can also be caused by the use of fake drugs.

"We are not giving up. As long as they continue to smuggle drugs into our territory, we are going to continue the fight. When we make a seizure, we make sure that the cargo is destroyed publicly. We hope that the losses we inflict on these fraudulent operators will dissuade them from continuing to traffic in drugs," Gregoire Mvongo, Governor of the East region, said last April.