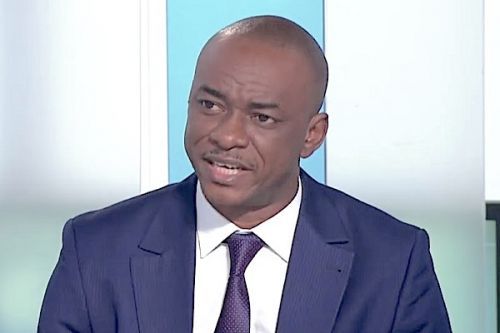 A precocious politician, Cabral Libii became, in October 2018, Cameroon’s youngest presidential candidate, since the country’s return to multiparty politics in the early 90s. Libii, who was 38 then, finished third with 6.28% of the votes. He came behind Paul Biya (71.28%) and Maurice Kamto (14.23%), who respectively head the CPDM and MRC parties. The youth was, however, ahead of Joshua Osih (3.35%), former opposition leader and candidate of the historical SDF party.

While not many believed he could achieve much, Libii, who entered politics after quitting his job with the editorial staff of Radio Campus in July 2017, was able to shake Cameroon’s political sphere during the presidential elections. This prowess, he owes to the popularity he gained through remarkable media interventions.

Taking advantage of his fame, Cabral Libii launched the “11 millions d’inscrits” operation, which aimed to get 11 million citizens to go vote. But he failed to achieve this goal, as some claimed that he was a puppet of the ruling party. Indeed, less than 7 million people enrolled to vote during the 2018 presidential elections. Regardless, the young lawyer was able to build a strong following of youths that helped him run for president.

Two years after entering politics, Cabral Libii became the head of the Cameroon Party for National Reconciliation (PCRN). This party, though relatively unknown to most a few years ago, now has five deputies in parliament and controls seven town halls -since the February 2020 legislative and municipal elections. In fact, Libii himself became a deputy.

It should be emphasized that his party’s success happened after the UPC or “Union des Populations du Cameroun” had been disqualified by ELECAM, Cameroon’s electoral council. The latter is the body that handles the organization and management of electoral equipment and referendum consultations.

When asked about his ambitions and how far he seeks to go, the young professor points to the Etoudi Palace. And as if to provoke fate, he keeps on his bookshelf “Revolution”, a memoir written by France’s President, Emmanuel Macron. Macron came to power in 2017, at 39.

Everything suggests that Cabral Libii’s ambition to lead Cameroon might be more than a mere whim. The Cameroonian politician has a lot in common with other influential African political actors who are also in their forties. Among them is the Senegalese Ousman Sonko, South African Mmusi Maimane, Chadian Succès Masra, and Nelson Chamisa from Zimbabwe. Eloquent,  coherent, and strong debaters, these people are all presented as outstanding media phenomena.

In Cameroon, all of Cabral Libii’s interventions are scrutinized on social media. And while some agree and others disagree with his opinions, one thing is sure: nobody is indifferent to the deputy's opinions, especially those about national issues. For example, after he spoke about the controversial transfer of a gold mine in Southern Cameroon to a big Chinese firm, the ministry of mines launched a communication campaign aimed at debunking “the 10 lies” of Cabral Libii and others.

As the 2025 presidential election approaches, the man who dreams of community federalism for Cameroon builds his path, with some success, despite a few challenges. One of these challenges is that Libii has been struggling to calm tensions between the mayor of Nyong-et-Kelle, his stronghold, and some municipal councilors who disrupt the municipality’s functioning.

This year, Cabral Libii set up a committee for monitoring decentralized communities controlled by his party, the PCRN. With this committee, the young politician hopes to do better than in 2018 and avoid losing as they did in December 2020, at the regional elections. But for that, he must convince the Cameroonian people who still doubt his sincerity. Among others, the people denounce his close relationship with Minister Jacques Fame Ndongo, a key figure in the RDPC (the ruling party), and the UPC’s disqualification which profited his party during the legislative and municipal elections.