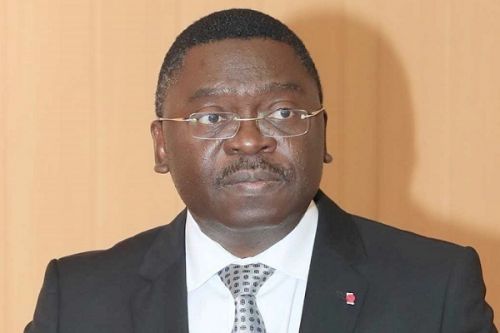 Most people in Cameroon view Ferdinand Ngoh Ngoh as the country’s most influential personality. After Paul Biya, that is. Some even refer to him as the “vice-president” or “vice-God”.

Ngoh Ngoh is the secretary-general of the presidency (SGPR). He was appointed on December 9, 2011.

Though he heads no constitutional institution, the diplomat is very influential, being close to President Biya who is known for being hard to access. He is the President’s main and most direct collaborator.

Since December 9, 2011, the date at which the decree on presidential restructuring was issued,  Ngoh Ngoh is the only person through whom Biya relays “all instructions relating to the country’s policies.” This decree positions the former secretary-general of the foreign affairs ministry (ed. Note: he held the position from August 2000 to December 2009) not only as the President’s legal adviser but also as his assistant, clerk…and scribe. He is the bridge between Cameroon’s most powerful man and the members of his government. Often, Ngoh Nogh issues letters conveying “the President’s extremely important instructions.”

Ferdinand Ngoh Ngoh can even take decisions on President Biya’s behalf. He was granted this authority by another decree for presidential restructuring issued on February 5, 2019. This decree allows him to sign “any document that concerns current administrative issues.” The secretary-general can also issue acts to enroll, downgrade, dismiss and retire police officers, and appoint any civil servant, up to the “deputy director of the presidency of the republic.”

Ngoh Ngoh, a native of Minta (Central Cameroon), has a lot of authority when it comes to appointments. This makes him extremely influential, according to Fred Ebongue Makolle, secretary-general of the ministry of decentralization and local development (Minddevel). Makolle, in his book, "Government Work in Cameroon. Organization, principles and methods of action" published in 2019, wrote that Ferdinand Ngoh Ngoh sorts the positions issued by an act of the Prime Minister which will be approved by the President.

Based on the claims of Jean Marie Atangana Mebara, Ngoh Ngoh can even form a new government. Mebara, former secretary-general of the presidency (the role now occupied by Ferdinand Ngoh Ngoh), describes how much he was himself involved in the formation of new governments and reshuffles between 2002 and 2006, in his book  "The Secretary-General of the Presidency of the Republic in Cameroon. Between Myths and Realities" (« Le secrétaire général de la présidence de la République au Cameroun. Entre mythes, textes et réalités » in French).

In Cameroon, the presidency’s secretary-general usually has a larger scope of coordination of government action than the Prime Minister, said Fred Ebongue Makolle. In his book, two facts illustrate this claim. First: unlike the Prime Minister, the secretary-general of the presidency can take specific actions that are normally solely reserved for the head of state (in areas like internal security, defense, justice, foreign affairs, public finance management, etc.). Second: the Prime Minister and ministers "take effective action only after obtaining permission, in one form or another, from the president.”

It should be emphasized that a few contextual factors explain why Ferdinand Ngoh Ngoh, who also happens to be the minister of State since January 4, 2019, has become so important. The main reason is that President Biya has been more withdrawn since starting his current term, on November 6, 2018. The Cameroonian leader, who is almost 90 years (he was officially born on February 13, 1933) is not as energetic as he was about 40 years ago when he came to power. Biya has been ruling the country since November 6, 1982.

Even if the leader is more withdrawn, more operational matters are subjected to his approval (appointments in public companies, the disbursement of over CFA100 million for common expenditures, and the management of the State’s private domain…). There is also the creation of task forces–which are headed by the SGPR–to monitor activities that are already coordinated by the President. Such activities include the organization of the African Cup of Nations (AFCON), held earlier this year, and anti-Covid actions.