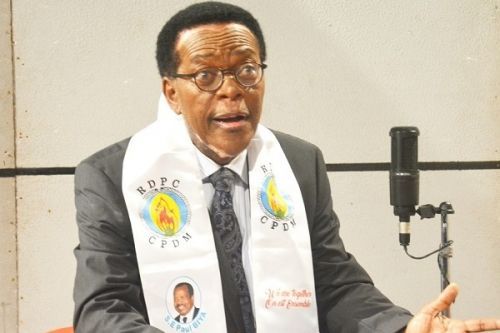 Jean Nkuete has been standing by Paul Biya for four decades, and is considered his “most trusted associate”. This loyalty probably explains why Biya, on December 9, 2011, made him Secretary General of the Central Committee of the Cameroonian People's Democratic Rally (CPDM), the ruling party.

Jean Nkuete, as Secretary-General of the CPDM’s Central Committee, has the upper hand on the nearly 300 members of the said committee, and on almost all elected officials and state personnel, almost all of whom are militants of the party of the "burning torch." Let’s not forget the several businessmen who support the party.

Nkuete makes sure they remain loyal to the President while throwing flowers at the leader. "Yes, Mr. President of the Republic, today more than yesterday, we are proud to tell you that the great family of the CPDM loves you, that the vast majority of the Cameroonian people love you," he said in March 2019, on the anniversary of the party.

Nkuete is also a member of the CPDM’s political bureau, the body that helps the President with party business outside the meetings of the Central Committee. As such, the economist makes and breaks careers. Indeed, the party’s candidates for all elections, except the Presidential elections, are named by the Central Committee. Here, militant zeal is often rewarded with a position in the government.

Born in 1944 in Balessing, western Cameroon, Jean Nkuete was appointed deputy secretary general of the presidency, with the rank of minister, in April 1983. In November 1986, he was named secretary general of the government. After that, he was Governor of the Bank of Central African States (BEAC) and Executive Secretary of the Central African Economic and Monetary Community (CEMAC), before returning to government in September 2007 as Minister of Agriculture and Rural Development.