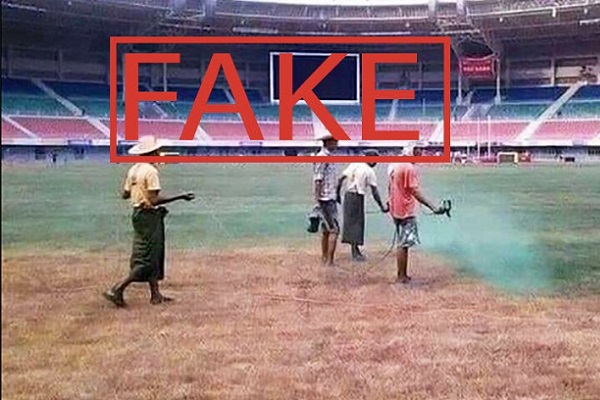 Since the start of the 2021 Africa Cup of Nations in Cameroon, rumors, images, and publications have been circulating on the Internet questioning the organization of the tournament and accusing the host country of "cheating" and receiving preferential treatment from the Confederation of African Football (CAF). These rumors are false. Here are some examples:

The image of people spraying green dye on the turf on a stadium recently went viral.  According to various Facebook posts, mostly in Arabic, the scene happened at the Japoma Stadium in Douala. The sports infrastructure, which notably hosted the group stage matches of Pool E., has been criticized for the condition of its playing ground. But the scene shown in the image in question did not happen at Japoma Stadium. The picture was taken in 2013, in Burma, a Southeast Asian country. French fact-checker France 24 Observers even wrote an article about it.

On the image, blue, green, and red seats can be seen. However, the seats at Japoma stadium are in green, red, yellow (colors of the national flag).

"Positive Covid-19 cases in all the participating teams except Cameroon: The reason for controversies at AFCON2021,”  is the title of an article published on its website by French regional daily  Le Parisien, on January 24, 2022.

This title is not accurate because Cameroon’s national team did record positive Covid-19 cases. On December 30, the Cameroon Football Federation (Fecafoot) announced that four of its players had tested positive and were quarantined. Several other participating teams also reported cases before the competition began.

However, Cameroon has not reported any cases since the opening of the tournament, due to strict sanitary measures implemented by the players and the whole staff.  Cameroon is not the only participating country that did not report cases since the start of the competition. Côte d'Ivoire, Egypt, and Guinea also took drastic measures to protect themselves from the virus and they have not yet reported positive cases.

Positive Covid-19 cases have been detected among several participating teams and Cameroon, as the host country, has been accused of fiddling with the tests to gain an advantage over its opponents. Those accusations are unfounded because testing is not carried out by Cameroon but by an independent laboratory commissioned by the Confederation of African Football (CAF), organizer of the AFCON2021.

"To ensure objectiveness and neutrality as well as trust on all sides, CAF will use an independent, internationally recognized laboratory to test the national-team players and their delegations," CAF announced in a release published on its website on December 16, 2021.

On January 25, 2022, during a press conference in Yaoundé, Patrice Motsepe, president of the CAF confirmed that the tests were indeed carried out by the said laboratory.

"We decided to call on an independent and reliable laboratory to carry out all the Covid tests of this competition. This laboratory carried out its services at the Euro and the Fifa World Cup. They have their own equipment, which confirms the impartiality of the results," said Patrice Motsepe.  The independent laboratory referred to is the Swiss group Unilabs, the European leader in medical diagnostic services.

Cameroon provided no adequate housing for the Gambian team

Several online media reported the Gambian coach Tom Saintfiet's claim that six of his players were made to sleep in the same room and share the same bathroom and shower amid the pandemic. The Confederation of African Football (CAF) denied the claim informing that it was ungrounded.

"CAF and the Local Organizing Committee are providing accommodation for all the participating teams All their expenses are paid provided the team does not exceed 40 people. The maximum number of people sharing the same room is two, which is the standard practice everywhere. If a delegation brings more than 40 people, they will cover the additional charges. Gambia received the same allowance as the other teams," the CAF explained.

Hotel La Vallée de Bana, where the Gambian team was housed, confirmed that it dedicated twelve twin rooms for the 23 players and 17 single rooms for the seventeen staff members.

The Gambia Football Federation (GFF) confirmed it and apologized for the coach’s statement explaining that his words were misunderstood.

No escort was provided to Comoros before its match against Cameroon

Internet users have accused Cameroon of not providing an escort to Comoros, as required by CAF rules. The whole story started with a video where Comorian players were seen practicing strapping (a physical therapy aimed at reducing ankle pains) in a bus. In this footage, a man's voice can be clearly heard saying in French that the team was denied escort to the stadium.

The man also complained that the players were still stuck in traffic at "6:45 p.m.," despite the match against Cameroon being scheduled at 8 p.m. at Olembe Stadium in Yaoundé. Several online media and social media posts (on Twitter notably) reported this information. However, the claim is negated by the video itself since it shows a police car preceding the bus with all its flashes on.

During a BeIn Sports show, Chaker Alhadhur, the Ajaccio defender who was lined up as the goalkeeper because of several covid-19 cases reported in the Comoros team, denied the claim of an inexistent police escort.  "The images in the bus? No, we had an escort ... But there was a jam and we thought we would arrive late. There was nothing to fuss about,” he said.

In addition, the bus arrived at the stadium at 18:34, as reported in this video.