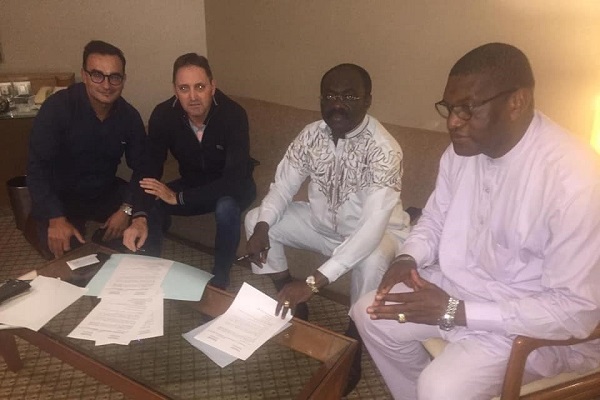 A social media post being shared since February 8, 2022, claims Cameroonian authorities secretly renewed the contract of national senior men’s football team coach Toni Conceiçao, before the start of the 2021 Africa Cup of Nations (from January 9 to February 6, 2022).

"The guys surreptitiously extended Conceiçao’s contract by two years before the 2021AFCON. This means that he will remain the coach for Qatar 2022 and Côte d’Ivoire 2023 (sic)," reads the post, which has already been shared dozens of times since its publication.

The post was commented on by many internet users, some praising the decision because of the coach’s “satisfactory” performance while others expressed their disappointment. The information is however inaccurate. Toni Conceiçao's contract has indeed been extended by two years but the signing ceremony was officially announced.

"I proceeded today in Yaoundé, under the supervision of the Minister of Sports, to the extension of the contract of the coach of the Indomitable Lions, Antonio Conceição and those of his assistants, François Omam Biyik and Jacques Celestin Songo'o," former FECAFOOT president Seidou Mbombo Njoya tweeted on August 27, 2021, with photos of the signing ceremony.

This post comes in a context marked by part of the public’s disenchantment with the coach after the Indomitable Lions lost the AFOCN2021 semi-finals to Egypt during penalty shoot-outs. Antonio Conceiçao Da Silva Oliveira, known as Toni Conceiçao, became the coach of the Indomitable Lions in September 2019, replacing the Dutchman Clarence Seedorf, who was deposed after the elimination of Cameroon in the round of 16 of AFCON2019.

At the time, some publications claimed a contract was secretly signed with Toni Conceiçao in a ‘hotel room’. Those publications even backed their articles with photos showing the coach and the Minsep signing some documents. The pictures resurfaced after the Indomitable Lions were defeated.

However, the Minsep has denied the information explaining the pictures show an audience the Minister of Physical Education granted to Toni Conceiçao.

"Conceiçao’s contract will soon be signed with three signatories: the coach, the president of Fecafoot, and the Minsep. So beware of manipulation and fake news," said Gabriel Nloga, head of the Minsep communications department, to SBBC.

On August 27, Cameroon extended its contract with Toni Conceiçao, "with the very high agreement of the President of the Republic," announced Narcisse Mouelle Kombi. The new contract runs until 2023. One of the missions assigned to the coach was to help the national senior men’s team reach the final of the AFCON2021 played at home. As he failed that mission, some people think he will be sacked.