No, this picture of a beaten-up thief was not taken at Makéa 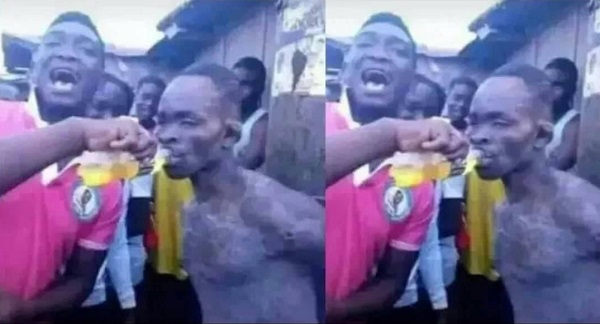 On May 25, a picture surfaced on Facebook showing a beaten-up man being offered an energy drink. According to the caption, the scene was in Makea, Douala, where a thief (the man pictured taking the drink) was caught and beaten by residents. The energy drink he was offered was to help him regain his strength for another round of beating. The picture was shared on Whatsapp and Instagram “Stories” by many internet users.

Thanks to a reverse image search on Google, we initially found out that the picture was first used on November 23, 2020, to illustrate an article that claims the scene happened in Takoradi, a Western town in Ghana. That article was relayed by numerous African media at the time.

However, with advanced image search, we discovered that the image has been circulating online since 2017. The first article to use the image appeared online on June 29, 2017, along with several others, all showing the same man.