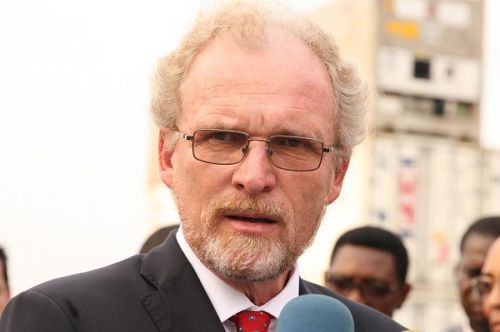 "I wanted to indicate that we are relying very much on Cameroon as a partner in the sub-region. On the political, security, and economic levels, it plays a pivotal role, especially in the fight against Boko Haram. In this fight, we stand by countries of the subregion with tangible support in the Multinational Joint Task Force.”

These are the words of Hans-Peter Schadek, head of the European Union delegation in Cameroon- reported by government daily Cameroon Tribune. According to the daily, the ambassador made this statement at the end of an audience with the Secretary-General of the Presidency of the Republic (SG/PR), Ferdinand Ngoh Ngoh, on 30 July 2020.

The European diplomat, whose mandate in Cameroon has come to an end, came to bid his farewell to the SG/PR who is the closest collaborator of the President of the Republic, Paul Biya.

During the audience, the two hosts reviewed the cooperation between Cameroon and the EU since 21 December 2017, when Hans-Peter Schadek presented his credentials to Paul Biya.

"I am pleased to recall that the European Union is Cameroon's first trading partner with almost half of its exports free of quota and customs duties as agreed on in the economic partnership agreement,” Hans-Peter Schadek said.  In 2019, Cameroon exported 55% of its products to the EU and imported 32% from them. Also, the European Union’s active development support for Cameroon was about XAF400 billion.

The ambassador revealed that to boost that cooperation, he worked -for three years- with the private sector to ensure that "the business conditions and environment are conducive, that there are more investment and jobs created.”

Job creation “is very important here with a dynamic and highly motivated youth,” he added.

On July 29, 2020, Hans-Peter Schadek was awarded the title of “Grand Officer of the National Order of Valour” during a dinner hosted by the Minister of External Relations, Lejeune Mbella Mbella.