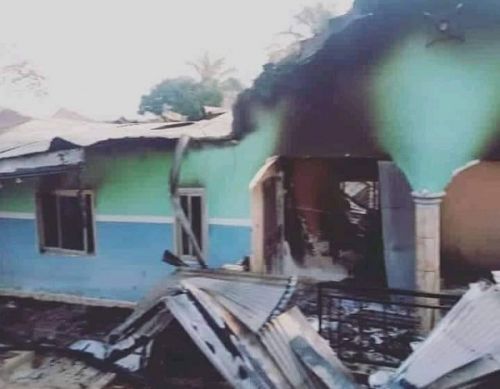 On the night of December 7, 2020, armed men set fire to the residence of Bamenda II Mayor Peter Chenwi, located in Ntasen, in the North-west.

According to security sources, the criminal act was perpetrated by pro-Ambazonia (named after a  so-called republic created by separatists of former Southern Cameroon).

No human casualties were recorded since at the time the fire started, the mayor was not at home. Indeed, for security reasons, he moved to the Up-Station neighborhood since assuming office as the mayor of Bamenda II.

The incident occurs just one day after the first regional councilors election ever organized in Cameroon.

Despite threats by separatists who opposed this election, the councilors of the ruling party RDPC in the commune of Bamenda II, led by Mayor Peter Chenwi, took part in the vote last Sunday.

"All the 31 councilors were present and effectively voted. We voted to implement the last phase of the decentralization process," said Mayor Peter Chenwi.

According to local media reports, the arson attack on the home of the elected municipal councilor was a reprisal for his participation in the vote.

According to government sources, a councilor was killed while returning from the voting stations in Widikum. That day, armed separatists also shot Rev. Father Anthony Viban and Brother Zoum Collins on their way to a mass celebration in Alahtening.

For Cameroonian authorities, last Sunday's election was a crucial moment in the pacification process of the English-speaking regions of the North-West and South-West, where the separatist crisis has been raging since 2016. Indeed, the establishment of regional councils (following this election) will allow the State to complete the march towards decentralization by implementing the special status required for the two regions during the Great National Dialogue of October 2019.