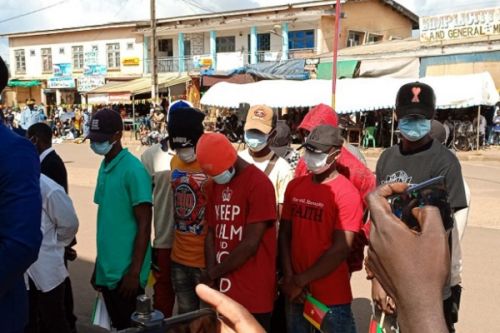 On October 6, in Bamenda, during a popular meeting presided by Prime Minister Joseph Dion Ngute, 13 alleged separatists were said to have surrendered. According to media present at the event, they were presented as former members of the separatist group “Marines of Bambalang,”  the terror militia lead by “general No Pity,” one of the most wanted terrorist commanders in the Anglophone regions (the so-called general even claimed credit for the deadly attacks against army patrols and posts, notably the Bamessing attacks that claimed the lives of 5 soldiers last September).

The most important of the alleged repented separatists is “General Scatter” presented as one of the lieutenants of “General No pity.” “I am General Scatter. I am sure people have heard about me,” he said claiming to have surrendered his armament, two AK47s notably, to the army before coming.

SBBC was unable to independently confirm the identity of the alleged separatists but this is not the first time authorities are presenting repented separatists. In October 2019, during the Major National Dialogue, about 30 individuals publicly surrendered and pleaded for forgiveness for the crimes they had committed.

In late 2018, the President of the Republic created the national disarmament, demobilization, and reintegration commission for former Boko Haram combatants and separatists. Currently, the centers, overseen by the commission in the Northwest, Southwest, and the Far North, have over 2500 residents.