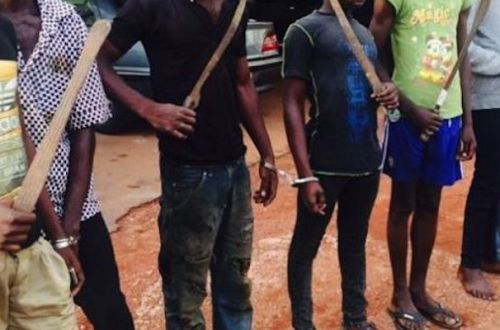 At least seven people, including one soldier, were arrested at Douala in January 2021. The arrest fell within the scope of anti-gang operations carried out by the national gendarmerie in the Littoral region. These arrests were made during several patrols in the so-called criminogenic neighborhoods in the city, the National Gendarmerie announces on its Facebook page.

It was gathered that the suspects are convicted criminals. The leader of the gang is presented as a multi-recidivist, convicted of robbery several times. The group's firearms supplier, a non-commissioned officer in the Cameroonian army, has also been arrested, according to security sources. A shotgun, an automatic pistol, an AK 47 rifle magazine, ammunitions, handmade weapons, knives, twines, and amulets were also seized during these operations.

In October 2020,  Samuel Dieudonné Ivaha Diboua (Governor of the Littoral Region) promised to mercilessly hunt down the hoodlums who were terrorizing Douala residents and restore security in the city. "Play-time is over now. We rigorously apply the legal and regulatory provisions regarding organized crime in Cameroon (...). All those who want to embark into banditry will meet the full force of law. Their accomplices will also reap the rewards of their misdeeds," he warne,  during a press conference.

His press briefing was organized few days after thugs calling themselves "microbes" attacked residents of Ndokoti and Deido. Subsequently, security forces arrested about fifty of those microbes.

Due to the resurgence of insecurity, vigilance committees were set up or reactivated in the neighborhoods to support police forces. In Deido, for instance, young people from the neighborhood roam streets to prohibit access to motorized cabs that are suspected of conniving with the criminals.