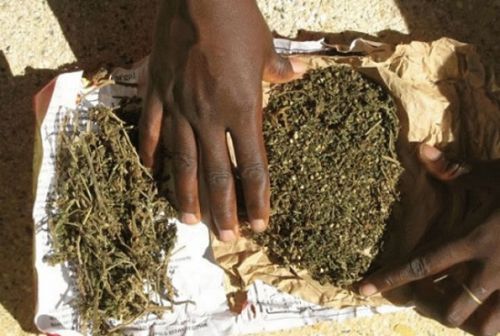 Law enforcement bodies have put a stop to several drug trafficking operations in Yaoundé. On Saturday, May 15, nine individuals, including two drug dealers, were arrested at a place called "Behind the Police School" during a raid carried out by the Nlongkak gendarmerie brigade. This operation followed "multiple denunciations and an upsurge in assaults" in this part of the capital, according to the National Gendarmerie.

During the operation, the gendarmes also seized about 10 kg of cannabis, 20g of cocaine, pipes and syringes for cocaine consumption, two machetes, chicha, and several coins. On May 10, four suspected drug traffickers were brought before the public prosecutor after being caught red-handed four days earlier in Mbankolo. A large quantity of hemp was found in their possession.

In Nlongkak, gendarmes dismantled a drug trafficking network that also specialized in sex parties and other deviant sexual practices. Nine individuals "found having sex" were arrested, including 6 students, all minors. "This activity was carried out in a home belonging to a 75-year-old individual, a presumed accomplice of the facts. The other accomplices are on the loose," said the gendarmerie. On Saturday, May 1, a 30-year-old man was caught red-handed selling drugs at the Madagascar market. He was taken to his home in the Nkolbisson district for a search.

This operation resulted in the seizure of a large quantity of drugs worth one million CFA francs. Another quantity worth CFA300,000 was seized. The gendarmes also found packaging and CAF144,500 in cash.

According to the national anti-drug committee, 21% of the population has experimented with a hard drug, and 10% are regular users, 60% of whom are young people aged 20 to 25. Law enforcement agencies report that thieves, rapists, etc. often admit to having used drugs at the time of their crime.