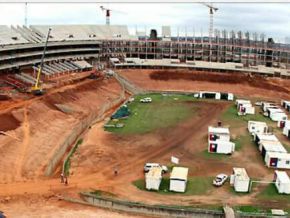 Is it really the Japoma stadium on this picture?

People say on social media that this image illustrates how far works have progressed at this new sports facility in Douala. True?

This picture has been extensively shared on social media to praise the celerity of works at the Japoma sports complex in Douala.

Truth is, though these construction works which started in June 2016 are progressing well, this is neither the picture of Japoma stadium nor is it that of Olembe in Yaoundé. This picture has probably been taken more than 6 years ago since it was used to illustrate an article posted in 2011 (http://www.football365.fr/infrastructures-4-stades-en-construction-1784373.html).

The Japoma and Olembe stadiums are actually much awaited, in the framework of AFCON2019 which Cameroon will host in 2019. The Turkish company, in charge of building the Japoma stadium should deliver the infrastructure at the end of 2018. The facility will comprise a 50,000 seats Olympic stadium with two training grounds, an Olympic swimming pool, tennis courts, parkings and green spaces as well as an annex of the national football academy.

It is being built on 45 hectares and cost CFA165 billion.

Here’s an aerial view of the Japoma stadium: