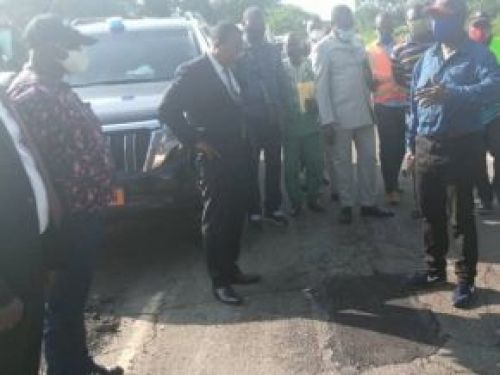 On June 5, the Minister of Public Works, Emmanuel Nganou Djoumessi, evaluated on the works conducted by Brigade nationale des travaux en régie (BNTR) on the Mbalmayo-Sangmelima road (nearly 120 km). These works include the reparation of the damaged axis and the plugging of potholes.

During the visit, the BNTR informed the official that all potholes from Sangmelima to kilometre point 18 +100 have been plugged. Further works consist of identification, demarcation, disbursement, and laying the asphalts. The cost of the works has not yet been revealed.

The official then instructed the engineers in charge of the works to organize the chain of the work to increase output in the shortest amount of time. Also, Mr. Nagnou Djoumessi ordered the reinforcement of the signalling, deemed weak, on the tracks being renovated, and the installation of the worksite signs in French and English from Mbalmayo to Sangmelima.

The BNTR is the unit created during the reorganization of the Ministry of Public Works in August 2018, to reduce the time and cost of road works. For example, the nearly 300 potholes on the Edéa-Kribi road (103 km) were recently plugged in 62 days at a cost of CFAF 101.84 million. According to the Mintp, the project cost was thus reduced by 90%.