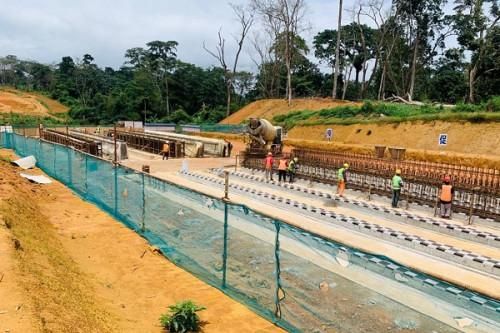 The first phase (60 km) of the Yaoundé-Douala highway will not be delivered by December 30, 2020, as planned in the updated work schedule. Indeed, China First Highway Engineering Company Ltd (CFHEC), in charge of the construction, is negotiating a third extension of the deadline.

The reasons for this extension request

To justify this request, China First Highway Engineering indicates that the works were slowed down by delays in the clearance of rights-of-ways and bill payments. And justifiably so, according to figures disclosed by the Mintp, CFHEC is still owed XAF40.742 billion for its works. Of this amount, XAF38.956 billion has to be disbursed by Eximbank China and XAF1.785 billion counterpart funds by the State of Cameroon.

To disburse the fund, Eximbank China requests Cameroon to pay the counterpart fund and sign the document detailing the refund mechanism backing the construction project. On July 9, 2020, the Ministry of Economy sent the document to the Prime Minister’s office, according to Emmanuel Nganou Djoumessi. During the cabinet council of July 29, 2020, the latter explained that the signature of this document is a requirement provided in the loan agreement providing that once 70% of the loan has been disbursed, a refund mechanism should be signed by the two parties before any further disbursement is made.

Apart from the financial and right-of-ways clearance reasons, the delay in meeting the agreed deadline is also due to the Covid-19 pandemic, the difficulties encountered during the demolition of rocky masses along the KP 40 and KP 60 and during the construction of earthworks on this same route.

Even if CFHEC meets the agreed deadline, phase 1 will not be commissioned before 2022 since its operationalization depends on the construction of two access roads over a 25-km route.

The first road is a 10-km (2 X 2 lanes) structure through which users can reach KP 00 of the highway from the central post office located at the center of Yaoundé. The second access road will be 13 km long and will start from Bibodi (KP 60) to National Road No. 3 at Boumnyebel.

For the construction of these “additional works,” Cameroon has opted for a public-private partnership and negotiations are ongoing in that regard with China Communications Construction Company (CCCC), the parent company of CFHEC. This is confirmed by the Support Council for The Realization of Partnership Contracts (Carpa) but no one can tell how long the negotiations will last. "The CCCC has not even submitted its initial offer yet," a Carpa official informed.

Overall, notwithstanding the study currently being carried out by Scet/Tunisia and Louis Berger, "to reduce costs" and set the final amount of this work, everything suggests that the Phase 1 of Yaoundé-Douala highway would not be commissioned that soon.