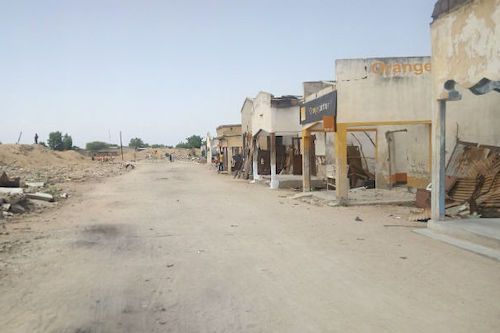 On March 19, 2021,  a meeting of the  Steering Committee of the  Lake Chad Basin Regional Stabilization Facility project was held in Maroua. The said meeting was attended by several partners of the Cameroonian State, including the United Nations Development Program (UNDP). During that meeting, Midjiyawa Bakary ( governor of the Far North region) revealed that several projects were underway to rebuild towns (including Amchidé and Limni) affected by the war against Boko Haram.

The projects fall within the framework of the XAF12 billion "Regional Stabilization Facility of the Lake Chad Basin - Cameroon Window," project initiated in 2019. The areas concerned by this project are the departments of Mayo Tsanaga, Mayo Sava and Logone, and Chari that paid the highest price to the sect’s exactions since 2014.

According to a UNDP official, the projects include the construction of the Amchidé police station, which is being completed.  " Also, the construction of customs and forestry posts have recently been completed. Minader (ed. note: Ministry of Agriculture and Rural Development) is our main partner for training and supply of equipment for agricultural groups. We are currently drilling several boreholes and installing solar panels," the official adds.

Let’s note that electricity projects have also been launched in the above-mentioned towns. In that regard, earlier this month, the UNDP launched a call for tenders for the installation of mini solar power plants.

During the above-mentioned meeting, governor Midjiyawa Bakary expressed his concerns about delays in the execution of some of the works inscribed in the project. Explaining that some companies win construction contracts and then delay executions, the official urged partners to be more rigorous while choosing contractors.

It is worth mentioning that although the Boko Haram threat is not completely over, the towns are gradually resuming their socio-economic activities. The aim of the project is to bring the beneficiary towns to the state they were in before Boko Haram started attacking them.