No, the general directorate of customs has not organized an auction ceremony for next October 5 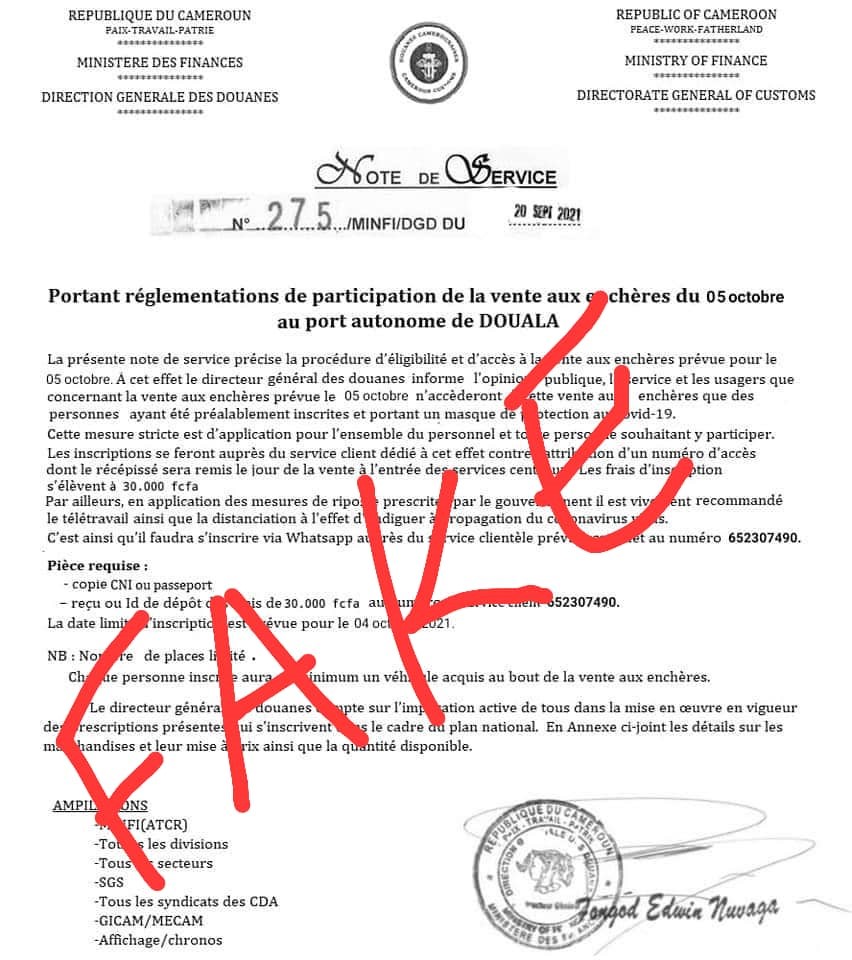 A document presented as a "memo" from the Directorate General of Customs has been circulating on social media for several days now. This memo supposedly lists conditions for participation in the auction to be held on October 5, 2021, at the Port of Douala.

According to the document, parties interested in this auction should register their interest with the customer service (652307490) dedicated to the task by paying a sum of XAF30,000 and receive a participation number.

Questioned on Thursday, September 30, the Directorate General of Customs told SBBC that the document was a "fake".

“Goods auctioned by customs are awarded to the highest bidder. There is no fee to be paid to participate. The general public should avoid doing so. The document is a fake published to scam people,” an authorized source said on condition of anonymity.

"The October auction program is not yet available. The modalities are the same as those provided by the Cemac Customs Code," our source added.

On the national customs website, only the program of the August 2021 auction can be seen.

In a June 3 statement,  Fongod Edwin Nuvaga, director-general of customs, reminded that the enforceable regulations require no upfront payment for participation in auctions. At the time, some communique attributed to the general directorate of customs was inviting interested parties to make an upfront payment for the lots they were interested in in the framework of the auction organized by the customs section of the Port of Douala.

The fake memo currently circulating is by no means similar to the model used by Cameroonian customs. Usually, the website and email addresses of this institution are written on the header but this is not the case for the fake memo. Another indication that it is a forgery is that several elements have been scanned and pasted on the document. In addition, the syntax and punctuation errors prove that it was not issued by a public institution.

According to Cameroonian regulations, goods that have spent a long time at the port without being cleared by their owners must be auctioned. The operation is usually organized to free space in the port for other goods and generate revenues for the customs administration. These auctions are always governed by specific provisions.