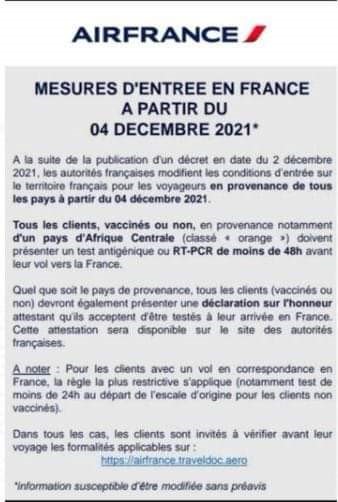 Recently, a document announcing new rules of entry into French national territory surfaced on Cameroonian WhatsApp forums. According to the document attributed to French airline Air France, the new rules would have become effective on December 4, 2021.

"Following the publication of a decree dated December 2, 2021, French authorities have changed the conditions for entry into French territory for travelers coming from abroad (...),” the document reads.

The document states that all the "clients" coming from Central African countries (including Cameroon), whether or not they have been vaccinated, will now have to "present an antigen or RT-PCR test less than 48 hours old" before boarding their flight to France. Similarly, all of them will also have to present "a sworn statement" certifying that they have agreed to be tested upon arrival in France.

The document is authentic although it was not published on Air France’s website. Air France sent it through mail and SMS to its clients to inform them of the new travel rules issued by French authorities.

On its website, the French Ministry of the Interior lists the new travel rules that have become effective since last Saturday. The same information is published on the government’s website. On both websites, it is particularly stated that any person entering the French territory must present a negative PCR or antigen test less than 48-hours old when the traveler comes from outside the European Union even if they are vaccinated. As for travelers coming from EU countries, the negative test can be 24-hours old for unvaccinated travelers.

French authorities explain that the measures aim to fight the coronavirus pandemic since the country is hit by the fifth wave and cases of Omicron (the new Covid variant) have been confirmed locally.

Several French media reported these new rules. Also, in response to the Omicron variant, the French government revised its classification of countries considered to be at risk due to their health situation. It now added "scarlet-red" country classification. Territories listed as “scarlet red” are those where the virus or one of its highly transmissible or vaccine-resistant variants have been detected. Central African countries are classified as “Orange,” meaning countries where the virus is “circulating but in a controlled way and there is no widespread circulation of variants.”