No, the Cameroonian army did not enter Chad recently for back up in the fight against rebels 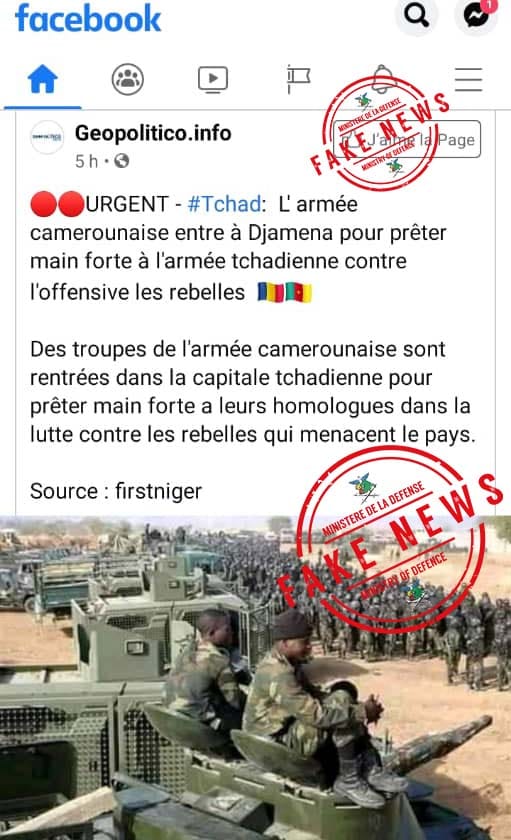 "The Cameroonian army is in Ndjamena to assist the Chadian army in the fight against the rebels threatening the neighboring country," a Facebook post claimed on April 26, 2021. The post, which was shared a dozen times, was illustrated with a picture showing many soldiers, some even sitting on tanks.

The caption suggests that the soldiers are Cameroonians on their way to Ndjamena to back up Chadian soldiers. Some of the comments accused Cameroon of interfering in a neighboring country’s affair since the country’s regular army was fighting rebels of the Front for Change and Concord in Chad (FACT), accused of killing President Idriss Deby Itno.

On Tuesday, April 27, 2021, the head of the communication department of the Ministry of Defense (Mindef), Captain Cyrille Serge Atonfack Guemo, denied this information, calling it "fake news”. Military sources confirmed to SBBC that the men seen in the picture are indeed Cameroonian military personnel but the picture is not recent. It was taken in 2014. According to a senior army officer, it was taken in Cameroon when a Cross Border operation was being prepared against Boko Haram.

With a reverse image search on Google, we found out that the image has been circulating on the internet since 2016. The picture was used in a February 16, 2016, Facebook post indicating that Cameroon, Chad, and Nigeria were engaged in the fight against terrorist sect Boko Haram, through the Multinational Joint Task Force (MNJTF).

In 2015, Idriss Deby Itno had sent a large contingent of Chadian armed forces to support the Cameroonian army in its fight against this terrorist sect. At the time, President Paul Biya explained that this brotherhood and solidarity gesture was part of the two Heads of State’s commitment to peace, stability, and security in their respective countries.