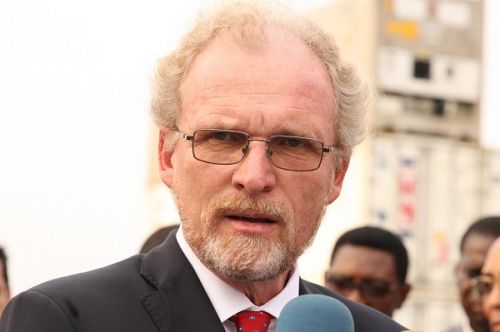 Anglophone crisis: EU pushes for a negotiated political solution that takes into account the country’s unity

The European Union calls on all parties involved in the Anglophone crisis in Cameroon to reach a political solution that takes into account the country’s unity.

In an interview with Défis actuels, the ambassador, head of the delegation of the European Union (EU), Hans-Peter Schadek (pictured), said “we have regularly exchanged views with the Cameroonian government on the security crisis in the Anglophone area. The European Union’s stance did not vary much. We are in favor of a negotiated political solution that takes into account the unity and diversity of the Cameroonian people.”

Concluding a mission in Cameroon, the EU envoy said he has discussed collaboration in various areas such as the Economic Partnership Agreement (EPA) and the Anglophone crisis with the Cameroonian authorities.

According to him, “the EPA has indeed had an indirect positive effect on employment because the Cameroonian companies that have benefited most from the opportunities offered by this trade agreement employ more than 31,000 people.”

“Thanks to this agreement, the trade balance between Cameroon and the European Union remains largely positive in favor of Cameroon. In 2019, Cameroon spent €1.4 billion to import goods from the European market and cashed €2 billion in export revenue on the market,” Hans-Peter Schadek noted.