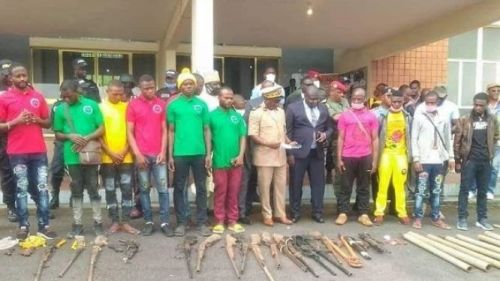 In collaboration with Pr Charles Ngadjifna and Martin Jumbam, Cardinal Christian Tumi recently published an 80-page book titled “ Ma Nuit en captivité” (My Night as a captive in separatist fighters’ hands). In HIS book, the 90-year-old prelate recounts the negotiations undertaken behind the scenes since the start of the Anglophone crisis.

He then explains the circumstances under which the Fon (traditional chief) of the Nso community left his palace, his prolonged stay in Yaoundé, the negotiations that led to his return when he was fearing for his life, and finally their abduction (he and the Fon) by a separatist group (on November 4, 2020, in Ndop) and release.

He also presented the morale of the separatist fighters, describing the weariness of some young people enlisted by the various armed gangs in the Anglophone regions. "Talking of the ‘human side’ of those young folks in the bushes, I remember a guy I met in Kaikai who told me that they were no longer sure of what they were fighting for since there is no clear and precise objective for their fights. Some of those who held us captive also said that they had lost sight of the purpose of their fights. Few of them even gave their phone numbers to my driver and weeks later, against all odds, called him to check up on me and greet me. They also told him that they had no food and asked whether he could help,” he writes.

The cardinal’s book is not the first to talk about the decreasing morale of separatist fighters, who under the pretense of wanting the secession of former Southern Cameroon, loot, torture, rape, and murder people in the Anglophone regions.

In May 2019, Lukong Clinton, a young girl presented as a former member of these rebel groups, made similar statements. "I was in the bush in Kumbo with the fighters for a year and a half. We believed in our struggle. But later, I realized that we were fighting for something else. Things had changed, there were murders, fires, and robberies, which was not our goal," she said in an interview with Frédéric Takang, a BBC correspondent in Bamenda.

According to Dr. Nick Ngwayang (founder of the association “Peace Movement in the English-speaking regions”), after years of blind fight,  many young people enlisted in the ranks of the "Ambas" (the name given to the separatist fighters) want to lay down their arms.

This could be an opportunity for the National Committee for Disarmament, Demobilization, and Reintegration (CNDDR) set up by the Cameroonian president to pacify the Northwest and Southwest, to optimize its results. According to official figures, the CNDDR has received 800 people since 2018. They are hosted in three centers in the  Far North, North-West and South-West.

Let’s note that currently,  at least seven armed militias with between 2,000 and 4,000 fighters operate in the English-speaking regions of the country, according to the NGO International Crisis Group.