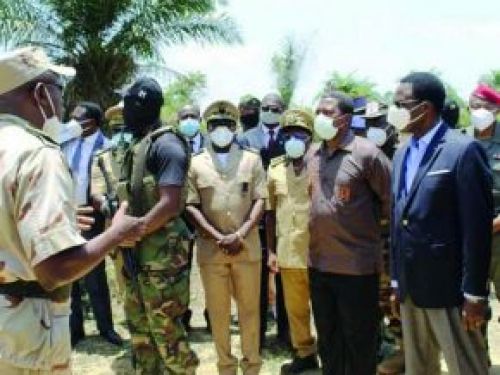 Colonel Guillaume Kinvy Ngande is the new commander of the 11th Motorized Infantry Brigade (11th Brim) in the Southern Region. Appointed by a presidential decree on March 31, the officer recently assumed his position.

According to Brigadier General Simon Ezo'o Mvondo, who commands the first Joint Military Region, this appointment is  "unquestionably” a testimony of the new commander’s “merit and dedication to the army and the nation."

Before his appointment at the head of the 11th Motorized Infantry Brigade, Colonel Guillaume Kinvy Ngandé was the commander of the Special Amphibious Battalion in Tiko. Under the authority of the commander of the 1st Joint Military Region, Guillaume Kinvy Ngande will now "plan and conduct operations in this military unit effectively," the Ministry of Defense indicates.

The new commander will also have to constantly ensure that operational capabilities are upgraded and the security at the borders with neighbouring countries tightened, the ministry adds.

Since the southern region borders three states (Gabon, Congo and Equatorial Guinea), military authorities deem this securitization mission "strategic" given the two crises in that part of the country.

The first crisis is the coronavirus pandemic, because of which the government closed all its land borders. The second crisis is Equatorial Guinea's "expansionist desires."

In early April 2020, President Paul Biya even instructed an interministerial visit to get a clear picture of the incidents Malabo has been creating in the region. This government mission was led by the Minister Delegate to the Presidency in charge of Defence Joseph Beti Assomo, and the Minister of Territorial Administration Joseph Atanga Nji.