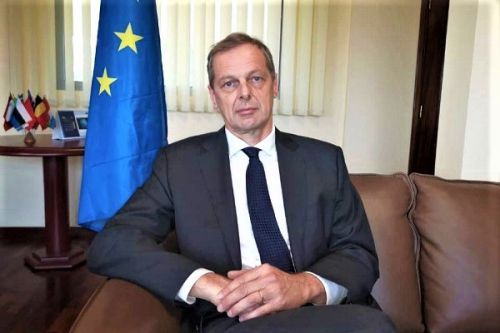 Philippe Van Damme (pictured), the EU Representative in Cameroon, made a tweet Wednesday to condemn the recent attacks in the Northwest and Southwest regions.

“Dreadful data. Nothing can justify this. Repeated call to all to cease all violence against the civilian population, to investigate all incidents, and to bring perpetrators to justice,” he wrote, retweeting a report by the Center for Human Rights and Democracy in Africa on the rise of violence in the regions.

As a reminder, a group of separatists recently attacked a gendarmerie station in the locality of Njitapon and killed five officers. In another attack, unidentified gunmen set fire to the Mamfe District Hospital, destroying nine of the facility's 12 buildings.

Last November, the EU envoy also condemned the attack on a school that left four people dead, including three students in Ekondo Titi, Southwest region. "Another senseless, outrageous, crapulous murder of innocent children. Who are these people ready to sacrifice the lives and future of their (?) children. More than time to stop this forced school boycott and to end impunity on all sides," he tweeted.

Since the beginning of the Anglophone crisis, the European Union has regularly called for an end to the violence and dialog between parties. In October 2019, President Paul Biya even initiated the National Dialog to find a way out of the conflict.

While noting that "many serious human rights violations continue to be reported and predatory criminality has developed," the Council of the European Union called for "the continuation of this process (the National Dialog, ed) to identify responses to the legitimate expectations of the people, while strengthening the inclusiveness of all relevant actors both within and outside the country, including women, youth and civil society."