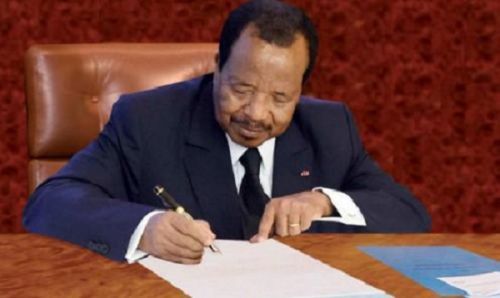 Yesterday December 28, President Paul Biya signed five decrees transferring powers to regions and laying down conditions for the “exercise of the powers devolved”  to regional councils.

The first decree concerns the “standard organization of the regional administrations,” the second lays down terms and conditions governing the exercise of some town planning and housing powers.”

The third decree concerns the regions’ participation in the organization and management of intercity public transport while the fourth “lays down conditions for the exercise of some environmental protection powers.” The fifth decree concerns tourism and leisure activities.

The decrees come almost a year after regional executives were elected. A few days ago, Wouamane Mbele, President of the Regional Council of the East, explained that the main problems affecting their activities were first the inexistence of texts governing their operations and the local civil service, those transferring powers to them as well as the inadequacy between the needs and the financial resources dedicated to regional councils.

Meanwhile, Rene Daniel Mintya, an expert in decentralization and local development, believes that in 2018, Cameroon entered a phase where the acceleration of decentralization initiatives is needed.  “This simply means that we need to expedite the implementation [of decentralization measures] given the delays and challenges we are facing,” he added.